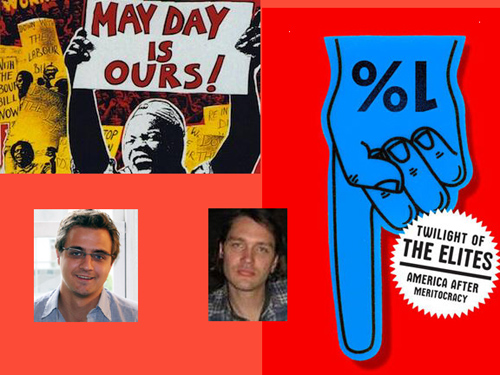 Two extraordinary thinkers both a generation younger than society’s current overlords, a half world apart, portend the end of capitalism … in my life time?

Pithouse almost says so, Hayes wouldn’t dare, even though it’s the essence of what they both believe. The difference between two privileged whites, one South African and one American. Yet both fear the consequences of making predictions.

I expect that you like me — whatever your political inclinations — are getting extraordinarily tired of politics. And politics dominates everything. I’ve been an obsessed NPR listener for decades, but now I find myself switching off the morning radio. A news junkie incarnate, I’m beginning to miss the opening of the evening news.

When I scan the web, or browse the cover of the too many magazines that still arrive my doorstep, I look hopefully for little doggies jumping up and down or beautiful ladies smiling unabashedly under their Easter hats. I haven’t yet subscribed to the National Inquirer.

And then, crashing through my ennui and disintegrating the daydreaming of being a little boy, again, march these two whippersnappers, like terminators of spring time, tornadoes ushering in a horribly long and hot summer.

Hayes’ book Twilight of the Elites has just been published and is a masterful history of what Marx portended as the last stages of capitalism: when meritocracy (a favorite Hayes’ term) excludes (Pithouse’ favorite term) all those qualified from any endeavor unless they’re a part of the in-crowd.

Hayes does a nice job of creating this theory carefully substantiating how in America meritocracy has come to be defined more by inherited wealth than anything contextual like knowing how to add numbers.

“And,” writes Pithouse,” the authoritarian and predatory nature of some factions in the ‘political class’ [read: ‘meritorious rulers’] cannot be denied.”

What really bothers me about these guys is that they are phenomenal observers and accomplished historians and I’m tired of both. Hayes has a weekly weekend TV show on MSNBC that is catapulting him into a limelight he might currently be disavowing. The show describes itself as “interviews, and panels of pundits, politicos … from outside the mainstream” even as he becomes mainstream.

Earlier theorists might have characterized these personal struggles as dialectical. That thought’s enough to send me back into dreaming about milkweed.

Alas to the rescue Alexis Goldstein.

Goldstein is the author and guru of HTML5 which will show you “how to use CSS3 without sacrificing clean markup or resorting to complex workarounds.”

This no nonsense approach to building your website has honed his mind. No fluffy HTML4s or 3s or phps or any of that junk. Just get to it.

And his critique of Chris Hayes is similarly just-get-it-done and right on:

“My great hope for “Twilight of the Elites,” is that readers will put down this book, and join us in the streets. Beginning with Hayes himself.”

But Pithouse suggests the two of them might not be seen in the street, soon:

“…tactics like occupations, road blockades and vote strikes are central to the grammar of the new struggles,” but are “being forged by people who have been rendered surplus to capital rather than exploited by it.”

It remains to be seen if Hayes’ book or Pithouse’s tome of published literature will make either of them rich. But I doubt either of them will be considered surplus.

I’m tired, guys. My generation is tired. You aren’t saying anything that we didn’t scream in the sixties. You’re incredibly smart and you’ve found remarkable new paths to the same conclusions good folk have made for generations, but … where’s the meat?

You aren’t in the streets, and I don’t want you to be in streets, because then you might be killed or maimed like Rodney King and you wouldn’t be able to explain why we should all be in the streets.

So both can be pardoned for not exactly saying what they mean or doing what they should say. And both can be excused for their periods of confusion as they navigate their personal lives to achieve some prominence so that their ideas matter.

And who knows if either will ultimately embrace their own principals. But it’s very good fortune for those of us with some hope that things really will change. (But not by them, right?)