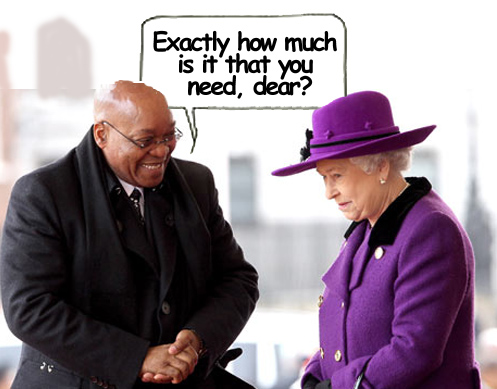 How do you feel during the Holiday Season when you see a homeless person drop a coin in the Salvation Army’s tin?

A deepening world economic downturn, caused mostly by Europe, is having violent effects in Africa even as poor Africa helps to bail out Europe.

It was hardly two years ago that the American stimulus and Ireland’s spectacular comeback from the cliff had markets and spirits alike rising. And Africa seemed to be on a steady path of growth and prosperity. The Arab Spring, modestly violent in Egypt and Tunisia, was good news.

Mali is essentially two countries, with a violent stalemate between extreme Islamists and a corrupt traditional government in Bamako. The Congo is blowing up, again. Nigeria is near catastrophic civil war in the north. Angola’s strengthening dictatorship provoked widespread demonstrations, yesterday. Uganda’s miserable leader yesterday took advantage of an eviscerated opposition by banning 38 organizations that had refused to denounce homosexuality. That’s the short list.

There’s some good news: Somalia, Kenya. But then there is bad news again: Egypt.

What’s going on, of course, is that the global economy is turning south.

That’s not an oversimplification, nor a rationalization. Even something as complex as Egypt can be explained as the generals’ growing confidence that their naughty ways won’t be interdicted because the big guys have more pressing business to attend to at home: their economies.

When the economy is improving, especially after the depression the world just experienced, no one wants to rattle the boat. The status quo reigns supreme. And that was the situation in much of the world and Africa in 2008-2010.

But when the economy goes sour, the prosperous hibernate, the middle classes begin to panic and the extremists forge strong alliances with the poor. The only salient political power that emerges is extremism. And that’s the situation, now.

You can’t tighten your belt while you’re losing weight and hope to put on some pounds. An undernourished kid has to reach critical mass before starting to exercise and build muscle. It’s called stimulus. (Athletes call it steroids.) The U.S. did it. China did it. South Americans did it and Africa did it big time, and they all struggled out of the hole.

But Europe didn’t, and now the world suffers. So what does poor Africa do? At the Los Cabos conference, South Africa pledged an additional $2 billion for the IMF fund designed principally as an European bailout. It did not go over well back in South Africa. But South Africa, the continent’s giant, knows that if Europe falls everything in Africa falls, too.

South Africa is unique among African countries to be considered a “developed country” instead of a “developing country” by world institutions. The classification was made shortly after World War I when the League of Nations appointed South Africa as the custodian of then Southwest Africa (now Namibia) taken from the defeated Germans.

It was a marginal call. In those days societies were seen as defined by their elites and upper class. South Africa’s huge and neglected black populations were seen more as a problem similar to America’s native Americans than as intrinsic to the society as a whole.

That wouldn’t have been easy, either. It’s not just a matter of pride, but of foreign investment, interest rates and much more. In the end South Africa’s new black rulers decided to retain the global classification.

And now they are fulfilling their responsibilities. And bailing out Europe who couldn’t figure out how to do it themselves.