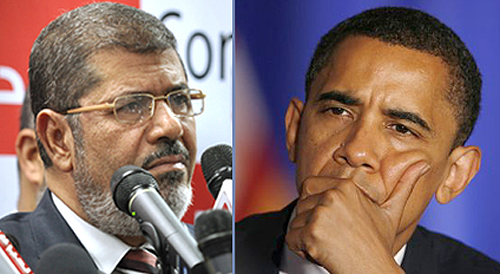 So far, so good. The outstanding question about Egypt remains how extremely Islam doctrine will be woven into the new society. And we aren’t going to know that for a very long time.

When my wife guided a group of intrepid Americans to Egypt at the start of this year, she heard first hand presumptions from local Egyptians that tourism was incidental to most of their hopes and inspirations, especially to those held by the Muslim Brotherhood.

“Tourists will have to adapt or not come,” a pessimistic tour official told her, insisting that the new Egypt could choose to ban alcohol and inappropriate dress, two essentials of most tourists.

There are few national leaders whose surname is spelled so many different ways as Mohamed Morsi, the Muslim Brotherhood leader elected as Egypt’s first democratic president this weekend.

This is because few have bothered to translate it out of Arabic until yesterday, when his election was final. Arabic translations are transliterations. It will take a while for the English-speaking dominated world to agree on Morsi, Morsy or Mursi; Mohamed, Mohammed or Muhamed.

Perhaps, he’ll tell us what to do, and that’s been the problem until now. Senator Kerry has made two stealth visits to Egypt this year both times reportedly to talk to Morsi. The results of those meetings have been as unrevealing as the Brotherhood itself.

The Brotherhood has kept quiet counsel not just since the revolution but for the decades previously under Mubarak. They learned how to survive an oppressive regime by keeping quiet.

But there is little question what the most vocal of their supporters want – like the young student who spoke to my wife in January. They want a strict Islamist society, sharia law, abrogated treaties with Israel and Jordan and renewed ties with Iran.

But frankly I don’t think this is what Morsi wants. Extremists are not stealthy. The many decades that the Brotherhood matured under Mubarak tempered it. Morsi is a Ph.D scientist (engineering) who held a faculty position in the California State University system for three years. Two of his five children were born in California and are U.S. citizens.

He taught at Northridge in California, which to be sure is an area of extreme religions. So I don’t doubt his dedication to his own religion. And his veiled wife who has never appeared publicly with her husband allows herself to be characterized as “active in the Brotherhood.”

Well, Ann Romney is active in the Republican Party.

There are many of us good ole American liberals who believe the Israeli power grid needs radical redesign. Many liberals such as myself believe that Iran will change more quickly the more it’s left alone. And who among us will denounce campaigns to cleanse corruption?

If these are the issues that Americans most fear then we should fear Morsi. And if tourists are unwilling to save a bit of money by forfeiting evening wine, I wonder how awe struck the Karnak Temple would make them, anyway.

The methodical, unextreme way the Brotherhood has come to power in Egypt presages no quick, clear indication of their vision for a future Egypt. It reflects only their dogged struggle for power. But if Morsi’s cliched announcement that he is now the “president of all the peoples of Eypgt” is to be believed, I think the cruise ships on the Nile will be sold out in a couple years.

From the outside looking in we learn that democracy does not always achieve our preferences yet while hardly discounting our ideals. Now if we could only achieve that prescience from within.