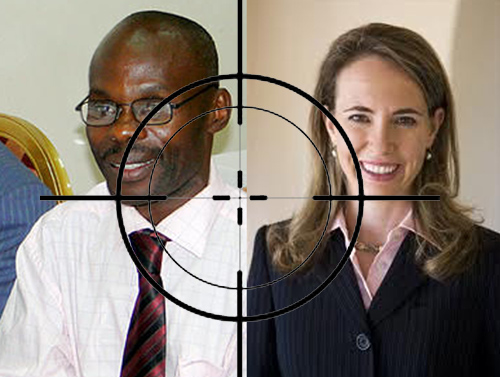 Not just Gabby shot, but now David murdered in certain part because of the hatred created by the American Right. There are two things I just don’t understand: (1) how can anyone deny this obvious link, and (2) how could we possibly have let these happen? Who will be next?

Wednesday afternoon one of the finest, gentlest and most articulate Ugandans to have lived was beaten to death in his Kampala home with a hammer. Kato was Uganda’s most prominent gay rights activist.

Kato’s death, like Gabriel Gifford’s attempted assassination, was not random. They were both likely done by crazed individuals, but individuals directed if not wholly inspired by hate speech from the American Right.

The incredible attempts by Americans including President Obama to deny this represents a dangerously irresponsible lack of common sense, if not a terrible act of cowardice.

Reporter Leigh Phillips of the European Union on-line publication EUObserver reported today that some EU States have now “threatened to cut aid funding to [Uganda] as a result of the [anti-gay] legislation, which was introduced after a group of American right-wing Christians travelled to the country in March 2009 to hold anti-gay rallies.”

You can read my own accounts of this terribly developing story, including lots of links and videos at “Trail of Hate Rounds the World”.

I am especially saddened and angered by President Obama. Both in his State of the Union address last week, and in a message deploring Kato’s death he refused to link the heated American Right rhetoric to the acts.

I can understand the special importance that a leader of such power has in reducing tensions – especially deadly ones – but in the State of the Union Obama specifically stated “There is no connection” between heated rhetoric and Representative Gabriel Gifford’s attempted assassination. Not to affirm a connection was wrong of Obama. But to affirm the lie that there is no connection is despicable.

His message about Kato was more circumspect. Denial comes only as inference in what was not said. Better, but no cigar.

With no cap on the lunacy from our leaders, denial of the causal relationship between the American Right’s rhetoric and violence has gone viral in America. We are once again burying our heads in the sand of deceit and fantasy.

This senseless violence will end only when the American Right changes the tone of public debate. And that tone is not – as often suggested – equally created by “both sides.” It is an American Right phenomenon. Only they can end it.