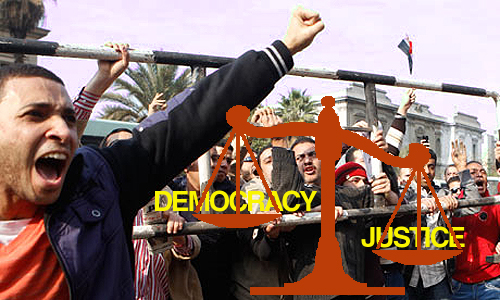 Egypt’s popular rising by a better educated generation reflects a global interconnectivity that transmits the will of the people as effectively as bar photos. But do Americans in particular understand what these people really want? I don’t think so.

Cries of “Freedom!” are easily translated from most any language, but “democracy” is another word altogether. Americans have consistently reported on African uprisings as “democratic movements.” Some are but most aren’t.

Sunday’s announced results in the Sudanese referendum – long expected – is hardly a step in the democratic process many claim. It’s a step in a process that secedes power in Khartoum to a political group that has been working for it throughout my life time, and in my opinion, well earned. But there is no room in this process for competing views about governance.

The first spark of popular uprisings in Africa began long ago in South Africa, and ever since the regime changed in 1994 Nelson Mandela’s party, the African National Congress, has been firmly in control and often in defiance of democratic ideals like freedom of the press.

Following the horrendous genocide in Rwanda in 1994, the populist uprising of Watutsi mostly in exile in Uganda stormed into the country and took control. Paul Kagame was the military general that led the attack, and he has remained president ever since. In the last election, his opponents were either jailed or killed.

Yet South Africa, Rwanda and now the South Sudan are definitely fulfilling the aspirations of the people who brought them to power. Those aspirations can be summed up in a single word, justice.

Americans misinterpret democracy for justice. We also tend to believe that democracy is more absolute than justice. Nothing could be further from the truth.

The filibuster in the Senate is a case in point. Manifestly not democracy, it prevails nonetheless as just. Ditto for the electoral college, or the ability of our courts to reverse a popular referendum.

The people in the street may be screaming for freedom and democracy to get the attention of CNN, but what they really want is … justice.

And that’s what makes the recent uprisings in Tunisia and Egypt, and likely soon elsewhere in the Arab world, to be so problematic. Wealth and opportunity cannot be redistributed as quickly as a Hosni Mubarak can be toppled from power.

And so it’s a matter of how patient the revolutionists will be. Africa is legend for the patience of its people, and that’s why I remain completely optimistic in the future of South Africa and most of Africa in general.

The big question, then, is whether Egyptians have the same patience as South Africans and Kenyans. It’s a very big continent: I just don’t know.