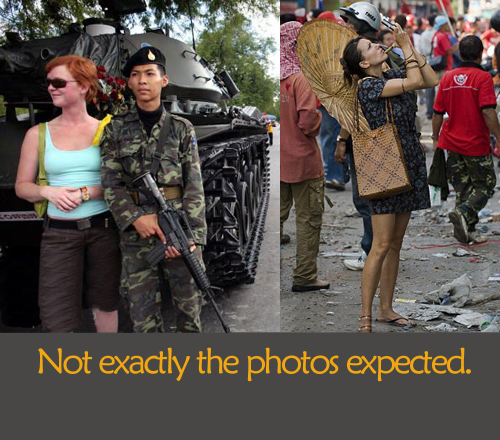 So far, so good for tourists stranded in Egypt. There are 30-50,000 tourists currently trying to leave Egypt, and their itinerary isn’t exactly what they thought.

They shouldn’t try to leave. They should hunker down like the majority of tourists, there, now.

In near lockstep with the delicate balance of the American government, tourists had initially decided to wait-and-see. Large American tour operators like Isram Travel and Abercrombie & Kent sent out bulletins assuring the world that their tourists were doing just fine.

But when the conflict stretched over last weekend, curiosity turned to ennui and finally real concern. And when the tourists tried to leave and couldn’t, the panic button was hit. That happened to thousands yesterday and may have been a mistake.

I’ve been in a number of conflicts as a tourist during my life time of travel. Most of the time the thing to do is … hunker down and wait it out. (Not always, but it is the thing to do this time in Egypt.) Patience, not a tourist attribute, has to be summoned up then cultivated for as long as it might take.

This is not another Rwandan genocide or Balkan War. This is a popular uprising that looks surprisingly disciplined. Until that “look” changes, stay put tourists!

Egypt gets between 15 and 16 million tourists every year, and right now is the highest of the high seasons. It is likely there are several hundred thousand tourists in the country right now. The U.S. State Department believes there are at least 5000 Americans currently touring Egypt, and possibly twice that number.

Desperate tourists don’t make good decisions. Those panicking and trying to leave are mostly being disappointed. Their chances of leaving aren’t good, and it will be extremely expensive. Much more expensive than “hunkering down.”

Television reports, of course, laud those who made it out. Because a lot of television can’t make it in to tell those stories. And of course there will be headlines about the odd act of violence at a tourist hotel … something that likely might have happened with a revolution or not.

The majority of tourists in Egypt right now are doing the right thing: stay there and wait it out.

At any given time, there are as many as 50,000 American in the country, including teachers, engineers and technicians working on the Suez Canal and many involved in the oil and gas industries.

Regina Fraser who hosts the PBS show “Grannies on Safari” may have enjoyed being interviewed by CNN but by yesterday she wanted out.

Regina was on a cruise ship on the Nile, and remains there unable to get to Cairo. At any given time there can be as many as 150 cruise ships sailing between Luxor and Aswan carrying as many as 15-20,000 tourists.

Egypt’s tourism contributes enormously to its economy. (Estimates vary from 5% according to the World Tourist Organization, the as much as 10% according to the Egyptian Tourist Board.) It is one of the last value markets for tourism of any kind to Africa, where a ten-day trip is available for under $2,000. This is half to a third the average elsewhere on the continent.

And most importantly, so far, no tourists have been harmed. In fact the opposite seems to be true. When I was a young kid traveling the world the last place to find a young single woman was Egypt. But Emma Vielbig, 19, was traveling alone in Egypt last week when the trouble started.

Like any kid, she ventured into the streets and tear gas. She got caught in mayhem but was rescued by some anonymous fellow on a motorcycle who grabbed her shouting “You’ve got to get out here” and motored her back to her hostel.

Few would plan a vacation into a revolution. A vacation is supposed to be at least a good measure of R&R. But a revolution is what’s happening in Egypt, and so far, tourists are not being redefined. They remain tolerated onlookers, cash heavy foreigners, but so far, safe.

There is an important lesson for all of us who travel. The situation in Egypt was mostly a surprise. It has much to unfold yet. But so far, tourists are safe. All they have to worry about is their own impatience.