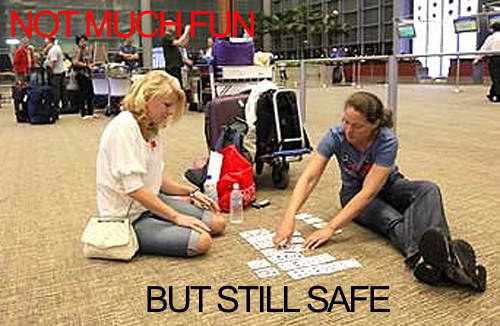 Because there are so many tourists in Egypt, and because there’s no legal requirement that tour companies honestly reveal the scope of their operations, it’s very difficult to get an accurate picture of tourists and tourism right now. But here’s my best try.

Before the trouble last week, the U.S. State Department reported there were about 50,000 Americans in the country, of which 3-5000 were tourists. Since January 25, probably 6-7000 of those have left, of which 1500 may be tourists. That leaves around 3500 tourists and 43,500 nontourist Americans in Egypt right now.

And I venture to say they will not be hurt. No one likes what’s happening in Tahrir Square, now, but the violence in the country is localized. Savvy tourists will remain safe.

About a third of the 6-7000 Americans who have been able to leave did so aboard U.S. government supplied evacuation charters. But most of the travelers on the U.S. government charters were not tourists; they were government workers and U.S. residents living in Egypt.

Two-thirds of the Americans who have evacuated seemed to have done so on commercial flights.

Since 2800 Americans had previously registered with the U.S. State Department as intending to visit Egypt now, I estimate there were about 5000 American tourists there when the trouble started last week.

Tourist registration with foreign consulates is a service all countries provide, but in recent times it’s mostly large tour companies that register their clients, rather than individuals, and it’s usually hardly a third to a half of the actual tourists who travel.

In the best of times true tourist numbers are very hard to get. This is because no U.S. or foreign agency reports the numbers of people entering or leaving a country in real-time. The U.S. is the best for reporting inbound tourists on a quarterly basis. But Egypt, for example, reports suspicious statistics only once annually.

What irritates me is that in the absence of being able to get this hard information, media turns to professional tour companies. This is a terrible mistake, because most tour companies (especially American ones) grossly inflate their actual production and often to the great pleasure of host countries.

Yesterday, for instance, in a single dispatch from Moscow reported in Britain’s Daily Mail the Russian state news agency RIA Novosti reported a ridiculous 45,000 Russians touring in the country at the moment. In virtually the same paragraph, Konstantin Shvartser of the Pegas Touristik said there were only 18,000. And in a continuation of the numbers folly, he then claimed only 18 Russians altogether want to leave the country, now.

But those (good) companies won’t reveal their numbers, and the fact is that the majority of American tourists traveling to Egypt these days don’t use established tour companies like these, so what’s happening to their customers is really rather insignificant to the bigger picture.

Most travelers to Egypt, today, book through the internet often directly with Egyptian companies. It’s likely, in fact, that as many Americans book Nile cruises with British companies as with American companies.

In trying to gauge the “real situation” imagine being a resident of Washington, D.C. or Watts in L.A. during the riots of the 1960s. The longer the crisis continues, the more basic services become strained of course. But unless you actually walk into the midst of the trouble, until strained services reach a critical point, you’re probably going to be OK.

Officially, most foreign nations have advised their citizens to avoid central Cairo and Alexandria. But many European countries, including Britain, have advised tourists who find themselves elsewhere (such as Sharm el-Sheik or Luxor) to remain until travel to international airports becomes easier and safer.

Most Nile cruises have stopped sailing, although we also know that large companies like Sonesta (which owns 5 ships), Sofitel and Hilton are continuing to provide services (food, shelter) to passengers who were onboard when the trouble broke out.

“Living conditions in Cairo and the risks to foreigners are not quite as bad as they may appear in the media,” writes the only excellent coverage I’ve so far found, in today’s Huffington Post.

So the bottom line is that the vast majority of foreigners, including tourists, remain in the country and have had enough time to position themselves in a safe way. Commercial flights continue to operate at the Cairo airport.

I am no expert on the MidEast, and I have been wrong in predictions before. But as one experienced traveler voice, I don’t see what’s happening in Egypt right now as dangerous for the tourists or foreign residents who unfortunately find themselves there.