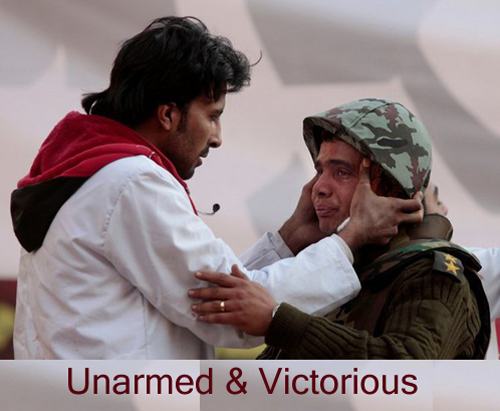 As this blog goes to press millions are at Tahrir Square just ending prayers. This mostly and remarkably peaceful revolution is a new kind. No longer revolution, but Twevolution!

Peaceful attempts to topple governments in my lifetime have been mostly failures. The one possible exception was the toppling of Peru’s President Fujimora in 2000 although it was not just the people in the streets but Peru’s other arms of government including its military that wanted him gone.

But in all the other cases, government change only came after tremendous violence often involving foreign governments.

Woe to Boeing and Lockheed, but it seems that fighter bombers might have been replaced by….

The amateur video which follows was picked up by AlJazeera and probably did more than any other video to really fuel the revolution. It shows the first street confrontation on January 28 between protesters and police, finally won by the protesters.

The video below was created a week earlier by a single, courageous woman pleading with everyone to join her in protest. She challenges watchers with the memory of Mohammed Bouazizi, the Tunisian who self-immolated himself.

Peaceful protest in the past seemed to be destined for failure. How many bodies must fall in front of a tank before the phlanx of bodies succeeds? Buddhism and nonviolence has thus had a checkered history.

But until now, Buddhism and nonviolence lacked a winning tool.

There is an answer to “how many bodies” and Tahrir Square may just have them at this very minute. There is a calculus where not even a nuclear bomb can suppress a united protest.

When NBC reporter Richard Engel was asked on a live internet feed Wednesday night what strategy the anti-government protesters could possibly employ to counter the armed and carefully organized thugs fighting them, he hesitated, but then answered enthusiastically, “Information!”

That’s it! America is discombobulated by competing media pretending to report social will but actually governed by a need to produce entertainment. So even while we are in possession of the greatest technology skills and assets in the world, and while those were used to elect our first black president, I see them mostly coopted by our commercial priorities.

But not a place like Egypt. Desperation is very subjective. It’s completely fair to say that many in the U.S. feel as desperate trapped by the socio-economic system as Mohammed Bouazizi felt within his Tunisian society before he set himself on fire. But as that first video by that courageous young woman explains, there are alternatives in this highly connected world to removing yourself from society.

Mohammed’s action galvanized the desperation in his society. But not with steel and bullets, just with … Nielson Ratings!

Finally enough voices fell in line that their universal message could not be defeated even by overwhelming force.

Alive in Egypt is a consolidation site of videos, audio and tweets.

More skilled videos being created from around the world about the revolution can be found at Mibazaar.

“We Are All Khalid” is among Facebook’s most influential pages.

There are hundreds of sites like this one, and this one.

Was it Richard Engel who said it? This is the Information Revolution?