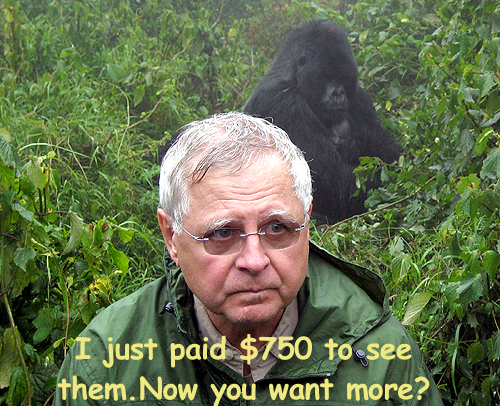 What do Mother Jones and the African Wildlife Foundation (AWF) share in common? They’re always broke?

Yesterday, tens of thousands of persons on Mother Jones’ mailing list received an appeal from AWF to add their signature to a petition against oil drilling in the Virunga mountains. Virunga is home to the endangered mountain gorilla and a host of other lowland rainforest species.

Ostensibly the one-click link within the email adds your signature to a petition telling the Ugandan government not to issue oil licenses in the area, but in fact the page looks remarkably like a signup sheet for the AWF newsletter.

Like the “Stop the Serengeti Highway” which continues nearly five years after the Serengeti highway was stopped, aggressive development of Virunga for oil was stopped three years ago after Leonardo di Caprio’s remarkable documentary, “Virunga” was nominated for an Oscar.

Di Caprio was incensed when a British oil company began exploitation of the Virungas in 2013. Together with an aggressive campaign by the World Wildlife Fund which collaborated slightly on the film the original oil companies developing the area pulled out.

That was more than a year ago.

There were probably many reasons major oil companies pulled out of the area. We were on the brink of the decline in the oil price, so if anyone was aware of the upcoming glut, these companies were.

The new peace that came to the Virunga right about that time remained fragile, and it was and remains actually Uganda, not the DRC where most of the reserves have been located, that is trying so aggressively to sell its rights. Without clear collaboration with the DRC, development would be incomplete and probably too costly.

Without the major oil companies’ interest, the Ugandan government’s possible imminent assignments of exploration blocks in the area isn’t quite as serious as it seems.

This kind of global pandering is typical of the Museveni government as he thumbs his nose at an increasingly critical foreign community. Last week western ambassadors walked out of his umpteenth inauguration ceremony when he deviated from published remarks into a tirade about the west and the World Court.

AWF is not alone in the current campaign. It’s joined by Greenpeace. Both organizations have had a long history of positive work in the Virungas but this current campaign rings a bit hollow.

Not because it lacks merit, but because it carries a very obvious ulterior motive: fund raising. Fund raising for all not-for-profits is a never-ending struggle and there’s nothing negative about it per se.

But there are thresholds of “urgency” when asking for money. AWF in particular has recently initiated a number of crisis campaigns, from elephants to lions, with increasingly short intervals.

It’s hard to get attention in these days of Trumped-up reality. But the right way to do it isn’t just by increasing the volume.