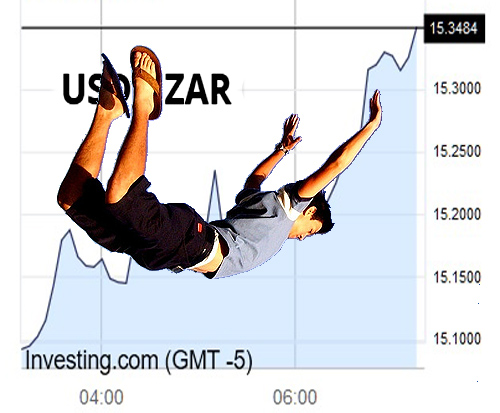 Lest this be too technical for those unfamiliar with Africa, this morning is a mess.

“Chaos has been unleashed and we all will be poorer,” writes a commentator this morning in the respected journal, African Arguments.

Many former British colonies in Africa are forcing calm while quietly panicking about Brexit, especially South Africa, Nigeria and Kenya.

I can’t see this getting better. Even if the hoped for British pivot occurs and somehow Article 50 is never triggered, the genie is out of the bottle. Economies don’t pause for politicians to catch their breath.

The biggest single concern with South Africa and Kenya is the plummeting pound. Kenya is also worried that a new British executive will be less disposed to foreign aid. Nigeria’s concern is the increased dollar which puts downwards pressure on oil prices, Nigeria’s lifeblood. South Africa suffered a 1.2% retraction last quarter and Brexit is likely now to dump them into a full blown recession.

There is even widespread concern that money transfers will be more difficult, something that will effect all aspects of business and trade.

By 0730cdt this morning all the indicators were moving in terrible directions. Former African colonies’ currencies usually move with the pound. Although weaker currencies are often spun positively for manufactured exports, most former colonies import more than they export so their economies become stressed when their currency weakens.

Add to this a 10% drop in the price of oil (as of 0730 cdt) and Britain’s former colonies are in a terrible mess this morning.

“Politicians paint a very beautiful picture of a very bad idea just to ascend to power,” writes one Kenyan about Brexit, today. “They dupe [the electorate] into voting for them, knowing very well that whatever they are promising cannot work even under any circumstance. That is exactly what Cameron did.”

Most Americans have never traveled to Kenya or South Africa or Nigeria, much less even the UK. Our economy remains the largest on earth so likely the one that can be least hurt by any other. But we are not immune to the effects of Brexit, and I mean that as much politically as economically.

Every Britain should have known what a disaster this would be, but their politicians duped them, to use the Kenyan’s words. The Leave Campaigners promised all sorts of things that they are today retracting like yo-yos, essentially admitting lying.

But there were even double-dupes like Cameron bringing up the whole idea then trying to turn it back; and triple-dupes like Corbyn only half-heartedly campaigning against the Leave because he really wants it.

In the end the electorate was only given one choice: leave or not. I think what the electorate manifest was a protest vote, a No vote, a vote against politics, against the status quo, because like many of us around the world, that’s the only power we’ve been left by our hoarding, power hungry politicians.

The most terrifying lesson to learn from this mess is that Donald Trump might win.