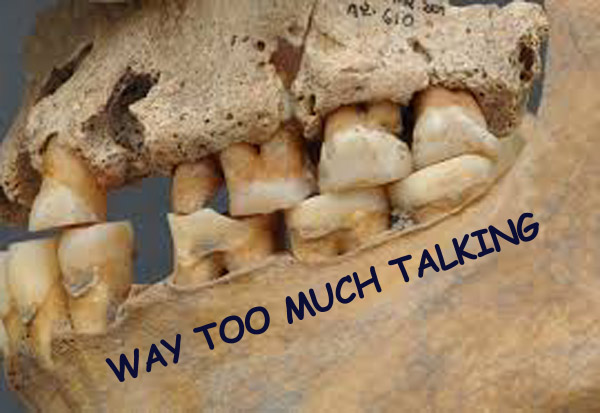 With the testimony this week by social media giants in the prism of fake news, I followed with special interest the discovery announced recently that old human teeth were “rewriting” human history.

A year ago German scientists made a remarkable find of 9.7 million-year old human-like teeth. For some reason, they took a year to officially report it. In a clearly rhetorical postulation the scientists suggested the teeth were hominin, and this would require a radical rethinking of current human evolution.

The mayor in the town where the discovery happened was pretty definitive: “I don’t want to over-dramatise it, but I would hypothesise that we shall have to start rewriting the history of mankind after today.”

His statement was immediately published by such normally careful media as USAToday and London’s Independent.

Virtually every paleontologist contacted has disputed the rhetorical postulations of the report.

Typical was Maria Martinon-Torres, an expert at the University College London who specializes in dental evidence. She disputes outright that the teeth are at all similar to “Lucy” – an early, famous hominin – as suggested in the scientists’ report:

“I think these teeth belong to a very old primate,” she said. “But they do not belong to a hominin.”

The most shocking publications of this fallacious claim were those that appeared in media claiming to be science-based, like ScienceAlert.

Better publications like London’s Independent have more or less retracted their initial claims. But most of the outlets that published story have not retracted it, like Fox News.

Perhaps we can get an insight into how fake news evolves by examining how a very respected publication, BusinessInsider, reported the story in their science edition.

They didn’t – as they should have – questioned the original evidence. It was just presumed that if a respected scientific journal published a paper that it had to be true! So they spent a lot of brain power trying to explain it:

Perhaps, “the upper canine similarities could be the result of convergent evolution – with the resemblance in shape to African hominin teeth being a genetic, environmental fluke, which just happened to arise in two different species in different locations.”

Translated this means that the “Out of Africa” theory that would have been contested had the teeth been hominin, might alternatively still be true if some other creatures were evolving parallel to man’s evolution in Africa, but in Europe.

It would be incredible intriguing an idea, if the evidence supported it.

So is this as much “fake news” as Hillary’s pizza murder?

Of course not, but it does fall in the same category. In today’s world you can’t just take somebody’s word. Due diligence, folks.