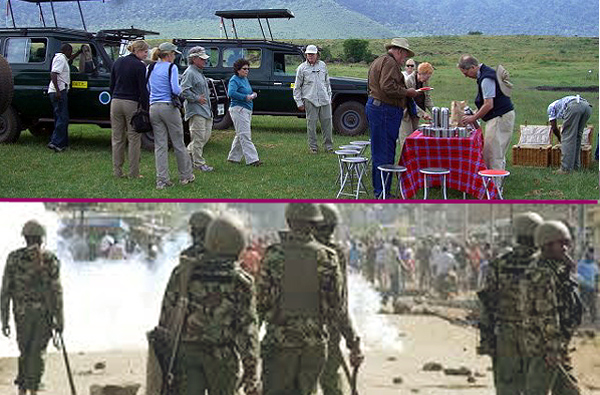 Racism has been affirmed and strengthened by democracy. This morning Kenya is controlled by Kikuyus and their allied tribes, as it has been for 300 years. Fires still burn, several people have been shot, and Kenya’s non-Kikuyu cities are ghost towns. It could have been much worse.

I am supposed to guide in Kenya in a few months. Should I go? Yes. Why? Because it will be safe for my clients, because we will only travel into Kikuyu and allied lands. What about other places? Probably in a year. I’ve seen it before. The Kikuyus will be benevolent if not wholly fair, and the country will settle into an uncomfortable peace.

About two-thirds of the country didn’t vote. (In the August 7 national election, nearly 80% of those registered voted.) Of those who did participate 98.3% voted for the incumbent president. Does this sound like a democracy?

Yet there are few countries in the world that designed, legislated and implemented such a free and fair election. It’s simply that everyone knew what the outcome would be. In fact, the opposition leader called on his supporters to stay away from the polls.

Absolutely free and fair elections, democracy, reflected the tribes of Kenya so precisely this Kenyan election map will probably be used as the best available data by social anthropologists studying the borders dividing Kenya’s tribes.

The non-Kikuyus feel they are treated as second class citizens. Upwards mobility, whether in business, or education or even cultural endeavors like music and entertainment is suppressed.

But as the fires smoulder today, all that appears absolutely true is that the opposition has reduced itself to rubble. A brilliant paradigm of democracy is that minorities aren’t just defeated, they’re subjugated.

There are still some loose ends before the story gets tied up. In Kenya’s most homogeneous non-Kikuyu areas, including its third largest city, there was too much violence for the rerun election to be held. They’ve been rescheduled there to Saturday. Not a chance, of course, that anyone will vote even if the violence subsides.

The incumbent, president-elect and president-in-waiting for 50 years (his father was the first president of the Republic of Kenya), Uhuru Kenyatta has invited the opposition leader, Raila Odinga, to meet with him. He hasn’t yet jailed him, as his father did to Odinga’s father, but that would be in the future, anyway.

What is wrong here is … democracy. At least as defined in Kenya, which is a crystal clear copy of its western allies, Europe and the U.S. It’s a serious lesson for all democrats around the world. When populations become so divided as they are by tribe in Kenya, compromise becomes impossible. Democracy becomes the oppressor, not the liberator.