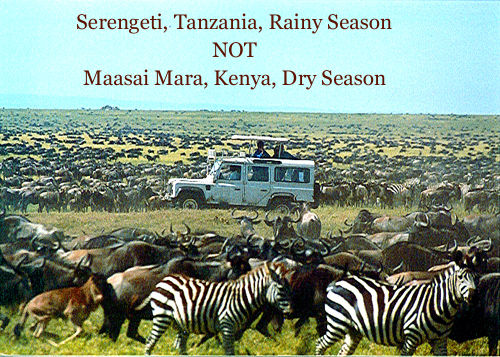 Sixty Minutes rebroadcast of “Into the Wild” Sunday night caused many of us experts serious angst. Basically three wonderfully short thumbnails of things wild in East Africa were riveted with inaccuracy.

But probably lots wrong with everything in between, like how often, how hard, when and with what kind and temperature of water, and who knows what else.

I hope the bristles on my back as I watched the 60 Minutes show weren’t as stiff as a Number 10 toothbrush. (Admission: I watched the tape. I had calculated that the Patriots/49ers game would be less stressful. Wrong.)

There were three segments, and the most egregious was the best and first, about the great migration, the Mau Forest controversy and how it effects the Mara River, and the transformation of some Maasai land into community based tourism projects.

Most egregious because it was very, very close to the situation as I see it, but agonizingly not spot on, providing opportunities for enormous misunderstandings.

Pelley and crew were in Kenya’s Maasai Mara, which represents approximately 5% of the land area of the Serengeti/Mara/Ngorongoro ecosystem through which the migration moves. He was correct in pointing out that the migration was there “for a very short time every year” but arrogant and irresponsible in claiming this is its most dramatic moment.

Some years, yes. Most years, no. The drama moves with the weather, and the simple historical odds will place the greatest drama of river crossings at the Grumeti or Balanganjwe rivers in Tanzania, not the Mara in Kenya as Pelley claims.

Pelley said that the “few days that it takes the herds to cross the river, crocs will bring down enough food for months” implying that the river crossing in the Mara is brief and singular moment for any given group of wildebeest.

Not true. Wildebeest cross rivers back and forth multiple times for no good reason. It’s an instinctive part of their overriding component “to follow.” They might have crossed the river ten minutes ago, and another group is crossing in the other direction, and off they go. A single wildebeest might cross back-and-forth a hundred times the same river in the same year.

The problem here is that Pelley is treating the migration like so many casual observers as the sum of its parts, individual wildes on some monarch butterfly calculus of pretty constant direction. That’s just not the case with the migration.

From year to year the actual movements of the migration change massively. There are even years when it never gets to Kenya, or hardly at all. Unlike butterfly migrations, the wilde aren’t hard-wired with a map. They go where there’s grass. And grass grows where it rains. And over time there are definite patterns to this, and which right now are being dramatically altered by global warming.

I have other serious concerns, but none as important as the above: Pelley’s claim that the migration is predictable and that its “most dramatic moment” is in “late summer” when the herds cross “in a few days” the Mara River in Kenya’s Maasai Mara. Wrong, wrong, and wrong.

Kudus though, and not of the animal kind, to Pelley for a thoughtful thumbnail of the Mau Forest controversy and of some local Maasai attempts to transform a dwindling agricultural lifestyle into tourism.

Finally, a recurrent criticism I have of American media is their lack of due diligence. The show used three experts for its three different segments. Two of the experts are honorable scientists to be sure, but none of the experts are current leaders in their fields.

Most of the current leaders of field research are no longer found in Kenya, or at their foundations in the United States. They are brilliant, younger and performing exceptional scientific work, many more in neighboring Tanzania than Kenya. It pains me constantly how a lack of effort by American media leads them not to the true sages but to the hack celebrities.

Nuff said. In sum it wasn’t bad. But to be good it needed care that perhaps no American TV is capable of. BBC where are you? 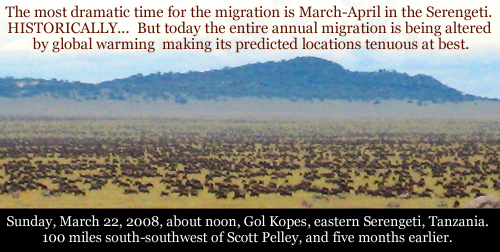