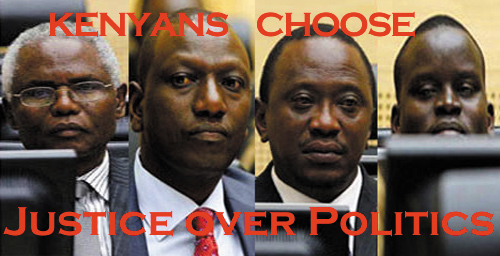 Not just free trade, but free justice! Africa once again leads the world into a new age. Today, major Kenyan politicians seem to have submitted to the World Court to face charges of crimes against humanity.

They include Kenya’s Deputy Prime Minister, Uhuru Kenyatta, and son of the founder of the country. Also included is a former kingmaker and government minister. The president’s Chief of Staff during the troubles of 2007 is also charged, and finally, a nonpolitican altogether, a radio personality who perhaps unwittingly caused rampant violence.

At 130p local Kenyan time, the World Court at The Hague confirmed the charges and announced the trial will begin.

The Hague is 6000 miles from Nairobi. Nevertheless, over the last two years, those accused have traveled back and forth with their teams of lawyers, have submitted to questioning and accepted the jurisdiction of the court to adjudicate their futures.

Can you imagine Carl Rove standing trial in The Hague for fixing the Florida count, or Rumsfield and Cheney for trumping up WMD? Or for that matter, Deng Xiaoping for the massacres in Tiananmen? More exactly, the slavic genocide of Radovan Karadzic was prosecuted by the World Court, but only after years of undercover missions that caught him as he ran from justice.

Can you imagine any of the world’s notorious criminals willingly submitting to The World Court? The U.S. and China even refuse to recognize it!

This historic day is the first time that powerful men in a distant foreign land willingly go to trial to defend themselves against a prosecution by an entity that claims to represent … The World.

For anyone who doesn’t follow Kenyan politics, this seems nothing short of absurd.

The decision by the World Court is about the violence which followed the disputed 2007 presidential elections in which 1300 people were killed, but perhaps a quarter million injured or displaced, and which included some horrific acts of ethnic violence.

The charges claim that these individuals orchestrated the ethnic violence with money, with direct orders and with violence themselves.

For over a year Kenyans debated whether or not to try the accused in Kenya. Parliament was twice deadlocked. There were demonstrations, pro and con. Ultimately, the Kenyan populace deferred the issue to The World Court.

Why on earth would still popular politicians willingly submit themselves to a foreign justice that could incarcerate them for the rest of their lives? Because Kenyans want it that way.

Alright, why on earth do Kenyans want it that way?!

Because Kenyans know – and I dare say even some of the supporters of these accused truly believe that their flawed system of politics is self-destructive, and that only by excising some of its components might … freedom reign.

And there is an absolute analogy with the political situation in many parts of the world, including my America: Try as we might to reform campaign laws, try as we might to impose term limits, try as we might all to restrict lobbying … try as we do to wrest control from an elite of politicians and businessmen and politically appointed justices, time and again we lose.

This is nothing short of a pipe dream, I know. To think it might occur in America in my life time is thrilling but probably idiotic. Nevertheless, the new age of the twevolution of Africa and the Mideast is not a flitting moment in history.

It will continue, and years from now if there is peace in the world, this day and the Kenyans who created it will be forever cited as moments of political brilliance.