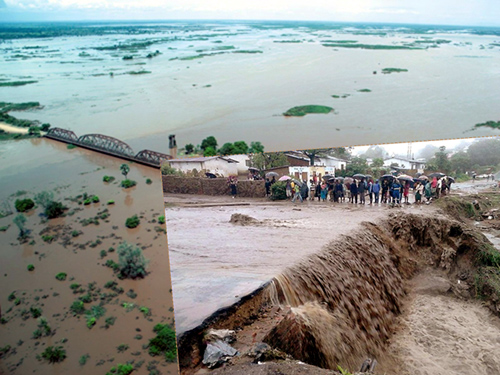 The devastation of the torrential rains now falling on southern Africa is an unprecedented catastrophe of global warming.

“The worst flooding in the history of Malawi,” according to Bloomberg News,
has forced the president to declare more than half the country a disaster zone.

The number of people displaced may soon exceed one million. Already a quarter million have lost their homes.

Professional climatologists in South Africa today said there’s not enough time left to adjust society, and that all that’s left to do now is to educate the population so they can better understand the weather warnings as they come:

Global warming has no less effect on the United States than southern Africa: we all know this well by now. The difference is that our infrastructure might be capable of absorbing the catastrophes. We might be able to build sea walls the way the Republicans want us to build border fences. We might keep the rising sea at bay.

The developing world has nowhere near the resources for that kind of response.

The mega deal between China and the U.S. will take decades to have an impact. It seems to me problematic that it will positively impact even our own future, but there’s no question the developed world will not benefit from it.

By the time reduced emissions by the developed world produce any noticeable benefit, the number of seasons of catastrophic flooding and drought in Africa will have devastated the continent.

It doesn’t take a rocket scientist to know what this means.

Material destruction leads to human misery. Diseases spread quickly, infrastructure like health facilities is destroyed, crop production is massively interrupted, so there is an exponential rate at which misery develops.

The dissatisfaction which then breaks down the societies will leave weak ones obliterated and stronger ones, like South Africa, with serious public uprisings.

Developed countries like our own will be unable to provide enough assistance to seriously turn things around. Just as we’re learning that wars in the Levant don’t work, we’ll learn that disaster response in the developing world won’t work.

As we accept that cruel truth, we’ll draw back into our own levies to watch the world outside our high tech shores dissolve away.

That’s the real possibility for man’s legacy. If the developed world survives, it will not have a pretty face.