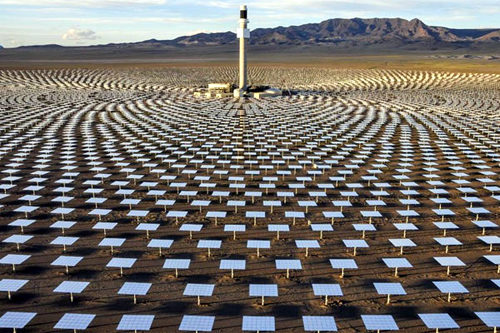 A California company is building plants and producing huge amounts of solar power for South Africa. Why not here?

In collaboration with a Saudi financing company (and Google!), SolarReserve will produce almost 350mW of electricity from four solar plants in South Africa’s sunny Karoo (from Kimberly west into the northern Cape).

In fact SolarReserve does have a single operation in Nevada, but the new operation just announced in South Africa will be its fourth just in that country.

Both our countries use fossil fuels at about the same percentages: 70% of American electricity is fossil fuel generated, 67% for South Africa.

Traditional fossil fuel plants produce more electricity once operating than comparable solar operations. American nuclear power plants, for example, proudly insist that they generate around 500 mW and a typical coal-fired electric plant generates around 550mW. This is up to three times what a typical solar plant creates.

No, unfortunately. The flip side of output is the cost of building a plant. Solar plants are much less expensive than traditional fossil fuel plants and can be up and running in 16 months, half as long as a coal-fired plant. Nuke facilities can take a decade to build.

That’s the key for South Africa, and it’s the reason such a fertile market exists there right now for solar energy providers. Last year the country experienced its first rolling outages and more are expected this year.

Africa’s rapid growth demands alternative energy sources in a way America does not. It costs less to build and can be operating in a fraction of the time. Politicians, I’m afraid, and not environmentalists are driving the process in South Africa.

Inevitably, though, Americans will benefit. As expected when South Africa’s first solar plants came on line they produced far less than projected. Any new technology is going to experience such growing pains.

Working through these engineering issues gave rise – at least in SolarReserve’s case – to a whole new alternative to PV (photovoltaic) solar electricity production.

PV is what we all understand: a cell hit by the sun produces electricity. It’s what’s on the top of your home and it’s what we use to create a bit of power in our camps in the African bush.

SolarReserve is now a leader of a new almost scifi technology referred to as CSP (concentrated solar thermal power): Ten thousand tracking mirrors, rather than cells, circled onto a 1,500 acre field direct laser-like sun onto the top of a 550′ tower at the center, melting salt at temperatures as high as 1,000F.

The salt is then used to heat steam to power generators. The reason the Saudi company has joined these ventures is because an easy by-product of this process is fresh from salt water.

By the way, the Australians just announced a breakthrough in the old PV technology. Traditional PV cells are rated as low as 18% efficiency. The new Australian methodology increases efficiency to 33-40%.

The answer to the question I poised at the top is urgency and capital. There is more of the first and less of the latter in South Africa than the U.S.

Those of us who look long-term, though, see the present urgency and poverty in South Africa vis-a-vis the U.S. as an opportunity to help us all.

Does this mean “green” is “poorer” and more “reactive” than non-green?

It’s the way of the (capitalist) world.