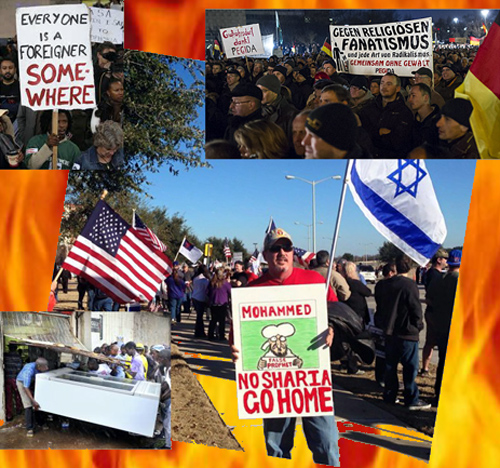 Xenophobia triggered by the slaughter at Charlie Hebdo has devolved in Africa from Christian/Muslim into primitive and very dangerous tribal racism.

The demonstrations, lawlessness and violence we saw last week in places like Algiers and Niger was a direct response by Muslims to French secular dogma featuring Charlie Hebdo’s mocking Muslim cartoons.

That grew in Europe to vigilantes against any foreigners. Particularly in Dresden and Birmingham xenophobia was ignited.

Back in Africa ethnic tensions are rising dramatically throughout sub-Saharan Africa. Today’s presidential election in Zambia, for instance, has been inflamed by ethnic tensions that had long since been curtailed.

I suspect this is happening all around the world. We know it’s happening here in America.

In Algiers, Niger, Soweto, Birmingham, Dresden or Texas, xenophobia today in particular is the manifestation of people feeling they’re getting shafted, unfairly denied what their televisions are telling them is a “recovery.”

Economic statistics are improving and truly fewer people are on the skids. It’s as true in Soweto as it is Dallas.

But the “improvement” is horribly lopsided towards those who were better off to begin with. It’s also likely lopsided to those who have a greater experience with adversary, like immigrants.

In Soweto the shops that were looted were owned mostly by Somali and those killed were Somali. Few people in the world have had to endure the life of a Somali. Even fewer still have found the wherewithal to migrate an entire continent to try to etch out a more productive life for themselves.

Those are the kinds of people who will likely bounce back first, since they’ve already achieved the skills of survival in adverse situations.

And those below them who linger, like the supposed out-of-work truck driver in Texas, thrash out at a Muslim in a suit-and-tie because it’s a difference that’s clear enough for him to understand, a sort of Limbaugh economics.

But today that unfairness is particularly sharp. The rich are unfairly rich, whether that be in South Africa or the United States. But unlike in the past, the rich are also in seeming total control.

Whether it is the Koch and Murdoch in the U.S. or the Zuma-ists in South Africa, the rich and powerful control much of the media with skills which include deceiving the poor and less informed that the problem is with “foreigners.”

The beauty of America is foreigners, the “melting pot” of the free world. Clearly this is where most of our creativity and ingenuity has come from. To a great extent, it’s a dynamic happening in South Africa, too.

Charlie Hebdo had no idea. Humor is sometimes so provocative it actually accomplishes something.