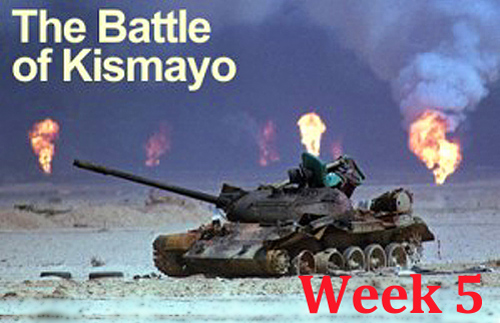 Little or no advancement by Kenyan troops in Somali this week ended today with reports this morning of 400 new Kenyan soldiers amassing on the border north of Lamu, and a limited movement of the existing forces towards Afmadow.

It’s hard to tell this morning if this heralds a real new military push — which would mean the week which was otherwise one strictly of global diplomacy was successful — or if the Kenyans are simply rattling sabers.

Until this moment the entire week had been quiet. Rains subsided but troops didn’t move. American drones and French naval vessels were completely quiet. It was a week of frantic diplomacy around the world.

And not diplomacy between combatants. Al-Shabaab (al-Qaeda in The Horn) continued to fortify the towns of Afmadow and Kismayo, the objectives of the Kenyan assault. And the Kenyans dug their own trenches.

The diplomacy was between African countries, the U.S. and France. The Kenyan UN ambassador – now clearly seen as more senior than the actual ambassador to the United States – spent a frantic week in Washington courting American generals.

And this morning, Kenyan news sources claimed that the Obama administration had agreed to consider a greater involvement.

The U.S. and France are widely presumed to have participated in the killing of around 50 combatants in weeks three and four with drones flown from a secret base in Ethiopia, and from French naval vessels just off the port of Kismayo. Both the Americans and French denied this, but there’s enough eye witness reports to be credible.

And I believe the silence of American and French guns this week is a reflection of them not wanting to outpace the Kenyans, and for everyone involved to become better coordinated.

In addition to the frantic attempts by the Kenyans to get the Americans and French reinvolved, the Kenyans mastered a situation within Somali that now has all the players opposed to al-Qaeda on the same page. This was not the case in the beginning.

The transitional Somali government, put in place and supported by Ugandan and Burundi soldiers in the capital of Mogadishu, originally criticized the Kenyan invasion. They now accept and support it.

The 8000 Uganda and Burundi soldiers ostensibly a part of an African Union sanction of peace-keeping publicly indicated their efforts were now coordinated with the Kenyans.

And finally, Kenya announced that it had obtained greater support from other African nations and hinted that a larger “peace-keeping” force was in the works. This Kenyan diplomatic success followed Kenya’s decades’ long reversal not to participate in the African peace-keeping forces that have been in Somali on and off since Blackhawk Down.

My view is that the Kenyans plowed into Somalia believing the element of surprise was more important than coordination with the players on the ground and around the world capable of supporting them. Last week they took a step back and began that process.

The 400 new soldiers on Somalia’s souther border does suggest a new chapter may be opening, but my sense is that the Kenyans will not begin until they feel all the players are in place … including the French and Americans.

But the larger question remains. Even if the al-Shabaab forces in Afmadow and Kismayo are displaced or beaten, what then? Are those militants so weak that a military strike can extinguish the movement?

An excellent analysis by Seth Meyers in South Africa’s Business Daily concludes that Kenya will be successful only insofar that “it avoids the mistakes Ethiopia made” in 2006. Ethiopia tried exactly what Kenya is doing, now, in 2006. The Ethiopian army is much larger and arguably much better than Kenya’s, but after five months the Ethiopians retreated with their tale between their legs.

They did “sort of liberate” Mogadishu and led to the 8000 Uganda and Burundi peace-keepers that have ever since fought daily to retain control of parts of Mogadishu. So there was some success. But it was small.

Meyers believes one of the failures of the Ethiopia was that their Sherman putsch was so bloody that Somalis were alienated not liberated, believing that Ethiopia was worse than al-Shabaab. This could explain this week’s hesitations by the Kenyans and numerous television spots in Kenya showing soldiers fraternizing with locals, passing out food to children and participating in school soccer matches.

There is a massive number of out-of-country Somali news media mostly on the internet, reflecting the huge diaspora around the world. Like the transitional government in Mogadishu, many of these are now supporting the Kenyans.

I concur with Meyers that the greatest threat is a prolonged battle for Kismayo. Kismayo is the heart and soul of Somali insurgency, a large functioning port that is essentially the capital of insurgent Somalia. A quick and successful battle by the Kenyans could be the proverbial nail in the coffin for al-Shabaab.

But a prolonged struggle “risks … the unintended effect of forging a dangerous new “alliance of necessity” between criminal and terrorist networks in Somalia” and by that Meyers means the innumerable pirates, clans, bandits and all sorts of other heavily armed bad guys might rally behind al-Shabaab, something that hasn’t yet happened.

I guess I feel more hopeful this week than in the past. I’m especially glad there were no more grenade attacks in Nairobi bars or tourists or aid workers kidnaped. But this could just be the lull in the storm.