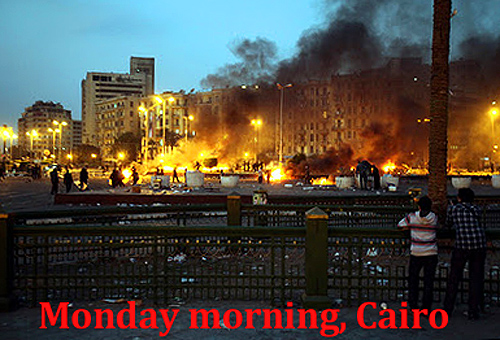 The political situation in Egypt may be very confusing, but the death-toll now exceeding 35 over this past weekend raises the profile of the current unrest above what it was when the old regime toppled in February. What can we see in the near future?

Weekend demonstrations were nowhere near as large, but just as violent, as earlier in the year. Egypt’s first free elections are scheduled for one week from today. The political parties and individual contestants in that election show no signs of boycotting November 28 or of requesting it be rescheduled, even while they are highly critical of how the election has been arranged.

This makes me believe that if we can get through this troubled week, and if elections are successful, that violence will subside and the political process will move forward. Clearly, though, if anything disrupts a clear and fair outcome, Egypt will take a terrible slide backwards.

There are several different issues galvanizing current protest, and because they’re complicated, the street shout is simply that the current military commander and defacto leader of the country, Mohamed Tantawi, should step down.

This is because he heads in a very dictatorial fashion the council that rules Egypt right now, and that council has promulgated a number of laws and procedures that have alienated large numbers of Egyptians.

The most egregious is Article 9 of the temporary constitution announced November 1. That provision isolates the military as it currently exists from any civilian authority. It guarantees a military budget that can’t be questioned, and it reserves the military’s right to veto any law passed by any government body involving the military.

But there are other issues as well.

Next Monday’s first free elections in Egypt will not be the expected moment of liberation everyone had hoped for. The rules for the election of a representative government became increasingly complicated over the last number of months.

Monday will be the first of three sets of elections, each held in different regions of the country, for the lower house of parliament (similar to our House of Representatives). The last of these lower house elections will not be completed until some time in early January. The military explains this strung-out process as necessary for guaranteeing ballot box monitoring.

The lower house might be seated some time in late January, but since actual law requires a consensus with an upper house (similar to our Senate), that is obviously not possible until the upper house is seated. Elections for the upper house are now scheduled for March. So it is unlikely that any effective government entity will exist before April.

Parliament is charged with promulgating a new constitution and paving the way for elections of a president, tentatively scheduled for a year from now.

But even that has been compromised by military edicts, which right now reserve 80 of the 100 seats in the constitutional convention as appointments. Although not wholly clear, it’s presumed the military would appoint these members. While it remains true that Parliament can accept or reject the convention’s work, the fact that the military has stacked the deck is very contentious.

There are other issues. Following the violence against Coptics recently, the military began a complicated process of vetting candidates for public office, which is intended to guarantee minority representative but at the expense of majority choice.

This obviously won favor with minorities, that therefore tend now to be less critical of the military than the bigger groups like the Muslim Brotherhood. The New York Times called this a “devil’s deal” between the military and minorities who feared the large plurality of the Brotherhood.

And finally one of the most contentious issues of all, which is still being played out, is whether former Mubarak party members can stand for election. Right now they can. But this is a third change of a position by the military since the issue arose many months ago. It is quite similar to what happened with Baath party members in Iraq.

I don’t believe there can be any other plausible authority in Egypt right now than the military. The military sees itself as the guarantor the revolution, and that’s how protestors initially saw them as well. But ruling this highly charged and extremely disparate society has proved challenging.

It’s extremely important to note that despite all the issues dividing the military from those appearing as political contestants, so far none of the main players in next Monday’s elections have called for a boycott.

So there’s a fair chance Monday’s elections will go off free and fair. And if so, and if those expected to win do so, it may be the new freely elected representatives of Egyptian society will simply ignore or otherwise work around the military’s many edicts upholding its supremacy over civilian rule. My sense is that this is what many of the principal contenders currently believe will happen.

That could set up a major confrontation with the military, but some ways down the line, and conceivably a strong enough civilian government would be able to negotiate the military’s position down to an acceptable level before such a confrontation were sparked.

Perhaps by 2013 or 2014 a civilian government could gain enough control of the country’s purse strings, for example, to tame the military.

But if the election outcome is too confused; if there are too many disparate and unallied winners to present any kind of unified civilian government position, then I expect a second violent revolution will arise from the conflict of the military and the then disenfranchised and essentially emasculated electorate.

Following the completion of lower house elections by the New Year, there may be some real signs then as to how the overall situation will play out. But because the process of electing fully the two houses of parliament extends through March, the situation is unlikely to reach any real turning point before then.

(And there are two best ways to stay tuned right now. Watch alJazeera Live and follow a compendium of real-time Tweets.)