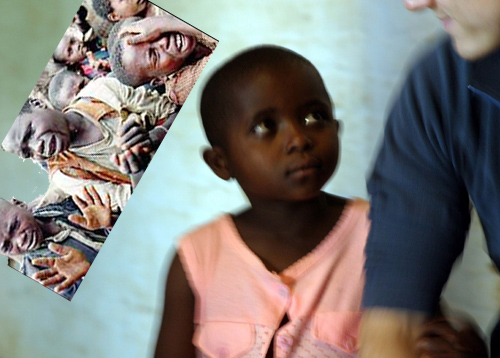 Clemantine Wamariya, a 23-year old Yale student and Tutsi who lived through the Rwandan genocide when she was 6 years old, has been appointed by President Obama to the board of the Holocaust Museum. Is this wise?

Ms. Wamariya’s life is a fairy tale story, and I mean her no ill will. In time she may mature into this role thrust upon her and become one of the most vital advocates of justice in the world. But that’s going to be a singular challenge likely greater than her escape from being hacked to death in Rwanda in 1994.

Ms. Wamariya appears a gifted person, so there’s hope. But I am concerned that her unusual prominence displaces the masses to such a degree that she will fall prey to conceptualizing the disaster and ultimately rationalizing it … the American way, so to speak.

Because preserving facts that cannot be altered with time is the first important step to understanding genocide. Look at what a mess we have right now between Turkey and Armenia, between teams of scholars arguing what actually happened.

Even the mass slaughter of Jews in World War II comes under constant challenge.

So fixing reality in time is fundamental to any attempt to analyze and ultimately reverse the evil. Ms. Wamariya cannot do that. She was too little.

Ms. Wamariya was only 6 years old when she escaped the Rwandan genocide. No six-year old anywhere on earth has enough continuous memory of the time to be a true witness. I think it much more likely that she honestly and hopefully rigorously has worked to confirm that what she would have been told by others older than her with her at the time, was true.

Step two is to assess blame. In such massive exterminations as took place in Armenia, Germany, Russia and Rwanda, there is blame enough for virtually everyone who was living at the time. Ms. Wamariya’s capacity for functional analysis might be stellar. It’s hard to know that of a 23-year old.

Ms. Wamariya may be the smartest person on earth. She may have an intellect uniquely capable of piloting us away from self-destruction. Her infancy in Rwanda may provide some subconscious authenticity to her reasoning, and that would be invaluable.

But she is not a witness. And she is not yet capable of rigorous analysis. She is a product of Oprah Winfrey. And I for one could nominate many others who I know personally, also nationalized American Watutsis, who would be better for the board. Much older at the time, their memory was mature and remains in tact. Reality is preserved with them. It simply cannot be with Ms. Wamariya.

Her subsequent years in refugee camps before being rescued is that part of her story I’ve been unable to establish completely. All that’s in the record is that she was granted asylum in 2000 and came to Chicago and entered a Christian grade school.

Who brought her? Who picked her out of hundreds of thousands?

That’s the red herring, folks. And this has nothing to do with Ms. Wamariya, nor is it a commentary alone on Ms. Wamariya’s performance since or potential from this point on. But as I’ve often written of the many plagues on Africa, perhaps the greatest was the proselytizing by Christianity.

Livingstone’s famous “3 C’s” – Christianity, Commerce and Civilization – says it all. The old explorer was one of the first to know you needed buzz words to raise money, and those three ideas were interchangeable in the European mind at the time. They remain so, today, particularly among the Christian community.

Christianity as redefined by the world’s superpower elite was an untouchable first principal of how to live life. Commerce is capitalism is the paradigm by which Christians condone greed. Civilization is a presumptive elevation of self-esteem, the notion that I know what is right for you.

This soup of ideas is the perfect formula for genocide.

Christianity as carried into Africa was bad for Africa. It’s one of the most important causes of Africa’s floundering in contrast to Asia’s blooming. But Christianity seems to be an important reason Ms. Wamariya bloomed in America.

From then all it took was an Oprah to find her, nurture her and escort her into prominence.

Today’s Morning Edition on NPR featured the touching story. And it did so with all the American proclivity to redefine the past in a better light. I was annoyed, for example, that Renee Montagne claimed the genocide in Rwanda happened during its “spring.” There is no spring on the equator. There is no universal rebirth as in New York city in April. The contrast is meaningless, but was not intended to be.

Americans are wont to deny that anything is wrong. On the one hand that’s probably a positive component of optimism. But when things do go wrong, Americans more than others retreat into the fantasy that “everything will be ok.”

In my early grade school days, there was a lesson as a common denominator that was carried from grade to grade and after school from aunt to aunt. “Don’t complain, child!” (I guess I did.) And that polemic has its own good and bad inferences, but as I lived in different parts of the world I came to see America more and more as a place where if it weren’t true that things were the best in the world, we had to believe so, anyway.

The appointment of a yet to fully develop Mozart as a custodian of one of the most horrendous moments of mankind’s past may make us feel warm and fuzzy. But it misses the mark by a good decade or more.