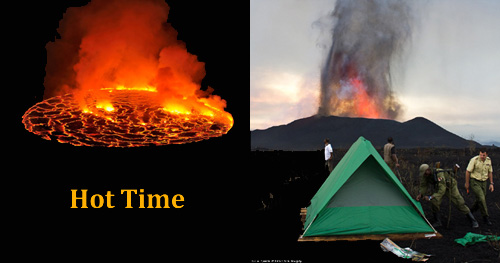 There is probably nowhere better on earth to see and learn about volcanoes than Hawaii. But it’s in Africa where you can risk your life to get close!

And that’s the important phrase: risk your life. I’m not sure it’s either wise or appropriate no matter who you are, but right now the officials managing a track of Congo national park are organizing trips up to a cliff just above the erupting Nyahamiru.

Nyahamiru – which you’ll find spelled in a variety of ways – is the live brother of the dormant volcanoes lived in by the mountain gorillas in Uganda and Rwanda. It is the western most volcano of this range. And for my entire lifetime it has been a live volcano moving in and out of dormancy about every 10-15 years.

In the days before the Congo wars, we traveled up and down Kivu province with abandon, and there were mountain gorillas in several different places. In Kahuzi-Biega national park literally adjacent Nyahamiru, there are the eastern lowland gorillas, gorilla berengei graueri, lives. Not too long ago Kahuzi-Biega was its own live volcano.

So this is beyond doubt the land of volcanoes. Some of my closest associates in the tour business in the 1970s and 1980s were volcanologists. Together with Hawaii, the volcanoes on the western Rift of Africa (this place) are the most spectacular and interesting in the world.

Which is probably why I’ve never personally climbed one, or a mountain beside one, as currently promoted in Congo tourist literature.

In fact one of the conservateurs (top officials) of the eastern Congo parks is personally inviting us all to join him on the plateau just above the volcano. And people are doing it. And I won’t admit whether I would like to do it or not, but you shouldn’t.

There’s no other place in the world with as loose or nonexistent tourist safety regulations as The Congo, so essentially you can do anything you want. Right now, the Congo’s wildlife sanctuaries are simultaneously its hunting reserves.

So the “Conservateur” of the public land on which sits this giant volcano has invited everyone to come and see it … up close.

This should not be disseminated on college campuses.

The conservateur has found a flat piece of land about 300 feet above the molten lava, and in a position where prevailing winds always carry lava spews in the opposite direction. It’s been given the scientific seal of approval by selected by volcanologist Dario Tedesco who heads the Goma Volcanological Observatory.

I’m not sure this is wise, but then if you’ve even just found yourself in The Congo you’re probably unwise from the getgo.

Here’s what one Scandanavian traveler recently posted on a blog:

“The Nyiragongo is an omnipresent view from the streets of Goma: a smoking giant during the day, a surreal glowing shadow at night. With a group of 7 tourists we started our ascend (sic) through the foothills of the volcano through dense jungle, after about an hour the forest gave way to an old lava flow, which according to our guide originated from the 2002 eruption, which burned down half of Goma.”

You got that last bit, right? Burned down half of Goma.

“After this point the landscape varies between lava flows, jungle and African alpine vegetation. The last leg of the journey is by far the toughest, a 20-30 minute hike up a 45 degree angle mountain mostly consisting of loose scree. But when you get to the crater all your weariness is forgotten, one of the most amazing sights you will ever witness welcomes you with warmth (literally).

“All your senses are stimulated by the loudly boiling, red-hot glowing, warmth radiating and sulfur smelling lava lake, the largest in the world.”

There is a reason that there aren’t too many tourists traveling into The Congo yet. The numbers going in never equal the numbers coming out.