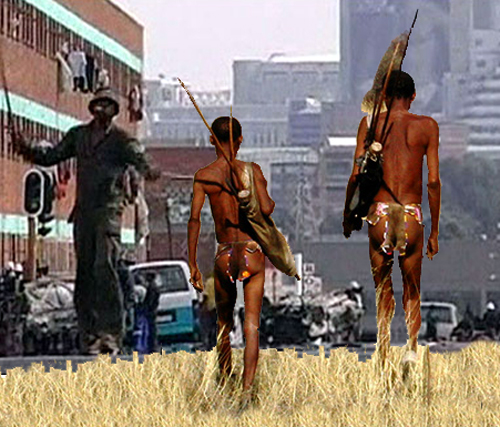 The Botswana bushmen have finally been excluded from their homeland, having lost the final skirmishes in more than a century of battling to retain their right to a traditional life in the Central Kalahari Reserve.

As of today, Botswana’s ancestral San people may only enter the reserve on month-long permits, one third the stay allowed foreigners entering the reserve for tourism. The news was reported today by a respected African publication in London.

The Botswana government claims the exclusion policy is for environmental protection and Bushman community development, but tourism has become increasingly popular in the area, and … diamonds have been found, there.

Perhaps the most egregious of forced native removals were native Americans in the late 19th and early 20th centuries, horribly summarized in what is commonly known as the Trail of Tears.

The difference with today’s situation with Bushmen in Botswana, and the next most recent similar situation with Maasai in Tanzania, is that the Bushmen seemed to have prevailed with a 2011 High Court decision that aggregated a number of earlier decisions securing use of their homelands.

But the Botswana government simply ignored its own high court orders and has continuously refused aboriginal people entry into the reserved and harassed those who snuck in.

Numbers are down because — as the government is eager to show — many Bushmen have taken advantage of government education and training programs that result in their abandoning the traditional life style.

In the last few years I’ve encountered San people working in the Kalahari in tourist camps and have admired their wit as well as their intellect. Clearly at least for those few individuals, they had no desire to return to the bush.

Last June South Africa gave a state funeral to a famous Bushman who had worked his entire life for the betterment of his people. But as with himself and his children, that was principally to educate them in modern schools and find them modern, urban jobs.

Contemporary, modern opportunities for Botswana people are considerably better than for most other Africans from other countries on the continent. Botswana’s economic situation while challenged during the global recession is far superior to most of the rest of Africa, because of its rich endowment of diamonds and other minerals.

So the question devolves simply into whether the government – the wider community – knows better what’s good for certain individuals than they themselves claim. And whether the trade-off, ancestral land for a good-paying job and healthy lifestyle, is worth it.

The age-old argument applies to peoples round the world, from such diverse theories of eminent domain to gun control. Exclusion from ancestral lands is certainly at the extreme end of this spectrum, but fundamentally is no different from any individual liberty restriction.

How far can a government go restricting individual liberties and still be moral?

The removals of the Shoshone, Yavapai and Navajo in the United States were certainly no less egregious than the Bushman from the Kalahari.

Is it just that we pine for the old days? Or are we afraid of our own power, even if it will better a peoples? Or as with native Americans, that we really don’t care what happens to them?