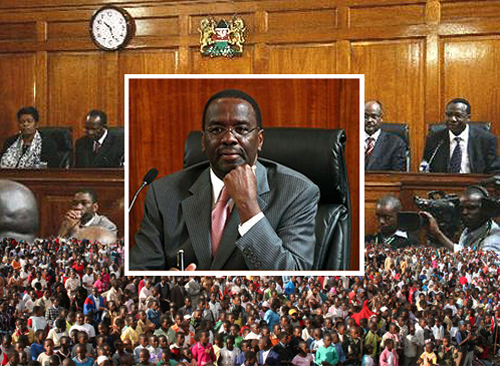 Kenya’s future is in the hands of a man little known outside Kenya: Willy Mutunga. The 65-year old Chief Justice will render his High Court’s decision on the recent election Saturday morning.

The country’s tension is building, its currency is falling, and protests are being prepared not just to follow the court’s decision, but right now to protest strict measures the government has imposed to ban public demonstrations.

But despite all this tension, Willy Mutunga can legitimately claim to have the trust of most Kenyans.

The Chief Justice has a long history of democratic activism, including a long stint in jail under the former dictator, Daniel arap Moi. His choice by Parliament was one of the easiest and least contentious of all appointments mandated by the new constitution.

His demeanor throughout the proceedings contesting the March 4 election has been exemplary. He’s been transparent, ordering live broadcasts of the deliberations.

And he’s given himself and the other five justices of the high court five days of full deliberations to make a decision.

Many would argue that is hardly enough to wade through the hundreds of petitions, reaves of evidence and uncountable allegations flinging between the two camps of president-elect Uhuru Kenyatta and aggrieved challenger, Raila Odinga.

And while that may be true, Mutunga knows all too well that this episode in Kenya must be brought to a conclusion.

Every day that passes without a court decision affirming Kenyatta’s election, confusion and complexity builds. Who is running the government? It’s not clearly known, as the former president Kibaki is dead silent.

Office holders under the last regime, which supposedly has ended, are becoming more and more vocal and partisan. Today, the attorney general petitioned Mutunga to consider that the “government” believes Kenyatta is the president.

If too much time passes whatever is left of the Kenyan government will be replaced by anarchy. Mutunga knows this, so he specifically advised the nation when the decision will be made: Saturday morning.

“I have given most of my life to a better Kenya and if taking it is what will be required to consolidate and secure our democratic gains … that is a price I am not afraid to pay,” Mutunga said recently, revealing the many death threats he’s received.

It may be this widely disseminated statement that has elicited the public trust. Death rates are rampant. Social media is beyond the pale. It is hard to underestimate the vitriol and anger in Kenya, today.

And frankly, I don’t think Mutunga and his court will render a decision on the evidence. The evidence is too voluminous, too contentious, too imperfect. It would take months to determine the ballots that were mismarked or miscounted. This will have be a ruling from the hip.

The ruling will be on whether the election authority which pronounced Kenyatta the victor with less than 10,000 votes of 12.2 million cast should be honored, or whether it should be denied and a new election process started.

The easiest thing to do is simply affirm the outcome. After all, all the parties in the election had expressed unqualified support for the election body which made the call. The Constitution gives this body wide latitudes of decision-making.

But not affirming the outcome seems more rational. Ballot counting was an unqualified mess; all sides agree on this. The .07% margin of victory is therefore a ridiculous conclusion.

But not affirming the outcome requires the court to suggest a remedy, a new election or run-off, all within its power but which then essentially emasculates all the months and years of institutional preparation Kenyans had invested in the election.

I predict the court will rule the election invalid. But I’ve been sorely wrong predicting events associated with this election, and no matter what the court does, Kenya’s greatest challenges are yet to come.