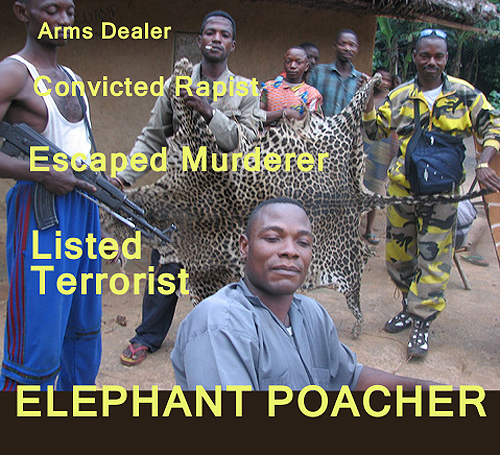 The widely publicized elephant poaching is mostly gross exaggeration when compared to the corporate poaching that nearly extirpated them in the 1980s but nonetheless a terrifying example of how mens’ wars exploit the natural world.

I’ve written before how the current elephant poaching is being sensationalized by the media as something much larger than it really is. Elephant populations in almost every part of Africa continue to increase, even though poaching is also increasing.

This dynamic is quite different than in the 1980s. And the reason is simply that the scale of poaching then was exponential compared to now.

The near extirpation of the species then led to the world-wide CITES treaty which was instrumental in stopping, and reversing, the poaching.

Today’s poaching is different, but no less terrifying: Until recently, anyway, it was confined to individual bands of men – not corporately organized mobile slaughter houses. It was motivated by individuals’ survival, not market driven or as an OPEC hedge.

One or two tusks were hauled to local markets, not tons lifted by helicopters to Yemen. And the poachers are generally individuals who pocket the loot and disappear, not by organizations that return again and again to better their last bottom line.

But the increase in poaching – however slight compared to the 1980s – has been enough to stimulate the black market. And small-band, individual crime that characterizes the majority of elephant poaching today is transforming into something much worse in certain areas.

I only hope the telling of this story will not fuel the hype. Jeffrey Gettleman of the New York Times first reported the situation last September. Unfortunately the wider media took the sensitive report and exaggerated it, presuming what was happening in the jungles of The Congo was the same that was happening in Tanzania’s national parks.

It is the lazy inability by buzz-word, snapshot media to separate the two phenomenon that so disturbs me. And I continue to presume that the former situation described so well by Gettleman does not represent a significantly new threat to the species. And certainly the one-off poaching by ad hoc bans of survivalists doesn’t, either.

Nevertheless, a report we received this weekend from the famous primate researcher, Terese Hart from the depths of The Congo, suggests what Gettleman reported in September is increasing and spreading.

Hart describes with the courage of an MGM lion and in near legalistic detail how a convicted war criminal escaped poor detention and has organized a serious elephant poaching band in the depths of The Congo’s jungle where she works.

The story illustrates the unsung courage of many local Africans wholly dedicated to conservation, of the potential effectiveness of The Congo government’s military (a story in itself), and how the wanton neglect of the developed world dumped weaponry into the hands of thugs.

Hart is a renowned researcher. She’s become now nothing less than a crusader, and many of us worry for her safety.

The sad fact of Hart’s story is that nothing is going to change unless major powers like the United States take ownership of their wanton neglect and aggressively begin cleaning up the loose weaponry of the world.

Simultaneously with powers like China aggressively stopping the trade in illegal ivory.

And until that action formula reaches The Congo, elephant may not be in as much danger as Terese Hart.