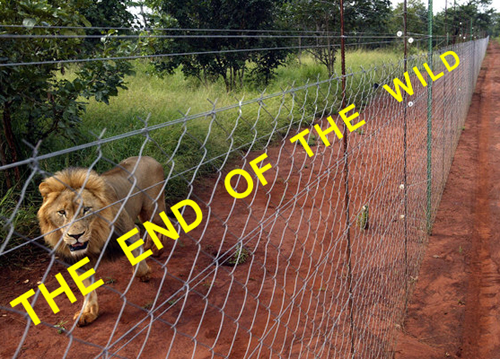 Separate but Equal: A chilling phrase used throughout history to justify such barbaric ideas as apartheid and reenforce the power of the status quo has now been applied to African wilderness in an attempt to save lions. It’s more naive than offensive.

Sorry to be such a drag on your week, but when the world’s greatest carnivore scientists conclude that the only way to maintain healthy populations of wild lions is to fence them, somebody’s got to remind them that then they’re no longer wild.

One of the greatest field researchers ever, Dr. Craig Packer of the University of Minnesota, led a team of 46 researchers that published this succinct and piercing recommendation earlier this month.

Lion populations have been declining for some time, and the study confirmed many earlier studies and reports that the decline is directly linked to lion/human population conflicts.

(There are, by the way, too many big cats in zoos.)

The March publication in Ecology Letters Online will become the definitive treatise on lion declines. Its cram-packed data is perfectly if masterfully compiled leading to a vastly understated conclusion that is tectonic in nature:

The study acknowledges “fencing has so far only been widely employed in a few African countries because of aesthetic objections, financial costs and the impracticality of enclosing large-scale migratory ungulate populations.”

Presuming the local African has serious “aesthetic objections” to fencing strikes me if not racist patently patronizing, so let’s move on:

This means it would cost about $30 million to fence Tanzania’s largest reserve, The Selous, and then an additional $22 million annually to manage that fencing.

In a cash strapped and aid-dependent economy, these numbers are mind boggling. I don’t doubt their veracity but when compared with the needs of human villages in the same areas in which lions now thrive, there is no chance this will be embraced locally.

That defaults the solution to foreign donors.

How do lions rank in the following list of priorities?

Finally, it isn’t just wildebeest or elephant migrations that are essential to the wild as we know it. It’s less dramatic and more subtle elephant and buffalo migrations, which need massive corridors to maintain healthy populations.

You might, indeed, fence lions and wildebeest and zebra. In fact Botswana did so, and it crashed their wilderness in the mid 1980s, leaving today a nice place to visit but hardly the wild that existed back then, with possibly a third of the animal populations deciminated.

But you can’t fence elephants, and buffalo are problematic. So are we talking about a “wild ecosystem” for lions that excludes anything over, say, two tons? Is this not as dramatic an alteration in what the “wild is” as one without lion?

An equally powerful if nuanced conclusion from this study is that social policies by governments like Tanzania and Mozambique which have struggled to allow indigenous populations to coexist with the wild, is a bad idea … (at least for the animals):

“Negative conservation impacts of human land use can often be [read: “should be”] minimized by restricting conflicting activities to separate areas rather than by encouraging their co-existence.”

A third of the Serengeti/Mara/Ngorongoro ecosystem is the Ngorongoro Conservation Area, which allows traditional Maasai to continue living and using the land. Similar policies exist in Mozambique and Uganda on wide tracts of wilderness.

These are not recent policies generated in any way as a response to human/wildlife conflicts. Rather, they were policies forced by the reality that humans with a right to ownership of the “wilderness” have been living there for eons.

Adopting Packer et al’s policy in this regards heralds back to the Trail of Tears, the justification at the time for which was much more noble than protecting a wild beast.

As Packer said with not but a bit of irritation to the New York Times:

“Let’s get real, here.” (Although in quite a different connotation.)

Packer is an outstanding scientist. But he’s a rather poor humanist, and with this study, either nihilistic or simply frustrated. By the way, he’s likely right, too.

What this means simply is that the wild is ending. Zoos are as capable of guarding a species’ survival as the wild can. Biodiversity on typical macro levels is in grave danger, and that may indeed bode ill for the world.

But the wild is ending. And ending the wild cannot be stopped if mankind doesn’t rev up into high gear, first, its own human development.

And that, Johnny, is the real story. There is no separate but equal. There is only togetherness.

The only possible solution to fixing lions’ lives is to fix people’s lives, if not first at least at the same time.