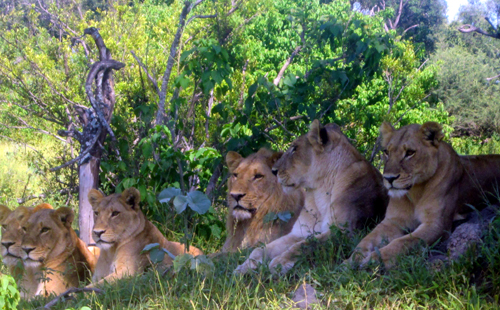 Six weeks in sub-Saharan Africa has confirmed my long-held views on where the best game viewing is and why, how seriously threatened the wilderness is by remarkably fast and unregulated economic growth, and how youthful optimism about Africa’s future mostly discounts its precious wilderness.

My first stint of the year began in Cape Town, included Johannesburg, multiple places in Botswana including the Okavango Delta, Victoria Falls and Zambia, Nairobi, and ended as I guided my first “great migration safari” in northern Tanzania.

The ability to contrast East and southern Africa so immediately corroborates my long-held view that East Africa provides better game viewing for the typical safari traveler.

This might seem strange when I also tell you that in a single day on Chief’s Island in Botswana we saw the Big Five (lion, leopard, rhino, elephant and buffalo) and that seeing the Big Five in East Africa is no longer guaranteed no matter how many days you have on safari.

That’s because rhino is so rare, today, in East Africa. (Caution: captive or contained rhino, as found in fenced places like Nakuru National Park, Solio and elsewhere in

Laikipia including Lewa Downs, doesn’t count. Those are fun to visit, but they aren’t true wildernesses, anymore.)

But therein lies the important distinction between East and southern African game viewing. The south’s wilderness has been managed much better over the last century. Kruger National Park in South Africa is likely the best managed wilderness on earth.


For more than a century, Kruger and similar southern African wilderenesses have sustained rich and varied biomasses. Although currently suspended throughout much of southern Africa including Kruger, culling had been and in many places still is an instrument of aggressive pruning that aimed to insure the most diverse biomass possible.

Culling has never occurred in East Africa, and likely because of its cost rather than any moral inhibition. Similarly, the south routinely reintroduces or just moves around various species from one wilderness to another in an attempt to achieve balance.

Anti-poaching is far better funded and managed in the south. All decisions about park management, its borders and its sustenance (including the still controversial actions of creating unnatural watering holes from aquifers) has come from officials that are far better trained and paid in the south than in the East.

So in a relatively short time in Botswana visiting two different areas in the Okavango Delta and Moremi we saw a balanced variety of several dozen types of larger mammals including a dozen elephant families and large numbers of buffalo and several prides of lion.

In Botswana’s Chobe balance has gone to the wind. Chobe is almost all elephants: too many, and at the exclusion of much of the rest of its historical biomass. It’s heart-breaking for me to return to areas along the Chobe River that were once

beautiful forests and are, today, grasslands. The elephant population has destroyed much of Chobe’s former wilderness. It is, in fact, more like East Africa than southern Africa.

Which is why so many people love Chobe. There are so many elephants in so many endearing behaviors and from time to time dangerously so, that Chobe like so much of East Africa provides the thrills often missing from a more balanced and rich biomass.


One implication in the above is that East Africa (and Chobe) are worse wildernesses, because the biomass is less rich, because they have either been poorly or not managed.

This remains to be seen. I think the scientific consensus points in this direction, but it’s been pointing in that direction for an awfully long time and we have yet to experience “the crash” scientists have been predicting for such out-of-balance wilderness.

Scientists might pale at the biocount of these wildernesses, but tourists are thrilled: On my great migration safari of 11 days in northern Tanzania, we saw 61 lions, 2 leopards, 5 rhino, and I don’t know maybe 500 elephant and a quarter million wildebeest? And perhaps several hundred thousand zebra, a hundred giraffe, and – very important by the way – fewer tourists than in Botswana.

But I don’t like the lodge circuit, and the safaris I guide are expensive. This lets me remove my game viewing from heavily used tourist areas into the East African wildernesses that are truly less used than virtually any wilderness in the south.

The unmanaged, some say chaotic, out-of-balance wildernesses of Chobe and much of East Africa result in greater numbers of larger animals at the expensive of many smaller ones that have gone extinct.

Theoretically, this situation is not sustainable. And this tension of nature trying to preserve itself is likely the reason for the much greater drama usually experienced on an East African safari.

It’s certainly a bitter sweet reminder that urgent action to preserve these great East African wildernesses has been grossly neglected. But as crass as it may seem, it also provides at least for the moment (and perhaps at the cost of the future), the “greatest wildlife spectacles on earth.” 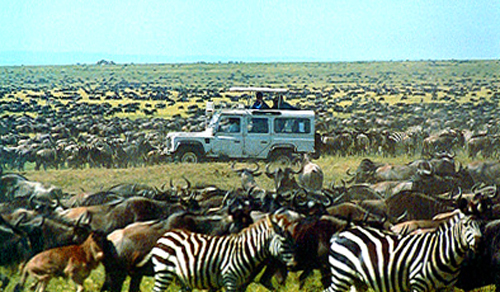