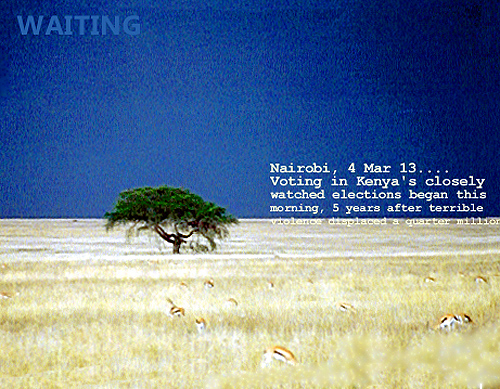 The starting bell will ring and ring and ring madly throughout Kenya Thursday for the start of the awesome 2013 elections. And then deathly silence follows for 6 terrifying weeks.

The economy has already stopped. Donors and outside investors alike have literally stopped all financial transactions. Schools will close so their buildings can be used for voting. Parliament disappears. The current president goes on vacation. The world waits.

I think it’s instructive that in this high tourist season, when wintry westerners flock to Kenya’s unmatched coral coast, some coastal hotels have shut down. Occupancy is so low, companies won’t reveal what it is.

Everyone waits for March 4, the election. Will March 5 be another beautiful African day, or something else?

I began this blog specifically to disseminate the news of Kenya’s last election in 2007, when the peaceful if paradisaical safari destination erupted in terrible violence. More than 1300 people were killed in a few weeks and nearly a quarter million displaced.

It was a near apocalyptic bump on the road to a modern democracy. The quick resolution of the contested election was unexpected and brilliant, a power sharing agreement which has held for five years between the radical opponents.

But now that tentative extra-constitutional arrangement is over. The country must rally round a timely and sustainable definition of itself for the foreseeable future. New forms of self-government, new civil rights, new judiciaries – all radically transformed from 2007.

The election is the culmination of one of the most historic transformations of a society in five years I think ever in the history of mankind. That sounds grandiose, I know, but it’s true.

The country’s financial and educational development in five years is preposterously positive, the GDP nearly reaching 5% growth per year. The visible transformation of Nairobi is unbelievable. If you went on safari in 2006 you won’t recognize the city now.

Its skyscrapers, 8-lane superhighways, Benz’ and BMWs will make you think you’re in L.A. Well, at least that’s the first impression. The layers of difficulties under this pretty veneer are daunting.

And the social transformation is more formative. The new constitution is incredibly just and creative. Educational advancement has skyrocketed. Per capita income is on a steep rise. A national Gallup Poll conducted only several months ago shows enormous confidence and security by Kenyans:

Across the country, Gallup concludes, individuals feel that their “Life Situation” will improve by a monster 50% in just the next few years.

The outcome of the primaries at the national and major regional level is a foregone conclusion for the six major political parties. Despite the parliamentary appearance of Kenya, the new constitution places huge power in an executive president, so like in the U.S., the presidential election is by far the most important.

(This, by the way, was a great disappointment to me. Executive presidencies are 20th century stuff in my book. As democracies mature, aggressive collections of diverse political parties each holding realistic power will guide societies better.)

The front runner is the current prime minister, Raila Odinga. The polls are definitive but the margin of error is big and not too far behind is Uhuru Kenyatta, trailed well behind by the third contender, William Ruto.

There is no questions that of the three, Raila Odinga is the man, the right man. He was denied his place in 2007, but he ended his fight gracefully to share what he had rightfully won to stop the violence, and he’s spearheaded Kenya’s transformation.

His two nearest opponents – Uhuru and Ruto – are thugs, both indicted by the International Criminal Court for instigating then organizing and paying for the violence of 2007.

It couldn’t be a clearer choice from the outside. From the inside it is woven into the deep power of ethnicity, the ancient clansmanship of Africa. Loyalty to family is something we all suffer, but in Africa it is seared into the soul.

March 4 is a day for Kenyans to choose between ideas and family: Ideas that I’ve written about for the last several years which put Kenya in the global forefront of human rights and justice. And family which knows nothing but to fight.

How would you vote?