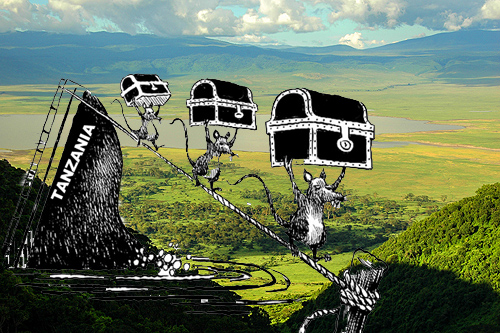 Paradise is being abandoned. Tanzania’s Ngorongoro Crater, its greatest single tourist attraction and one of the most pristine areas on earth, is in the midst of a political crisis that threatens normal tourism there.

Officialdom in Tanzania is rarely much more than organized crime, but even that can be better than the mayhem currently being reported in and around the crater.

Tuesday one of the “good” committees in Tanzania’s mostly corrupt parliament called on the government for “urgent action” to resolve a crisis that jeopardizes tourism and the environment in ways we’ve seen before, and in ways that are getting tiring and tedious.

There are no principal government officials left at Ngorongoro Crater National Park. The Director, Conservator of the National Park, the Chief of Security and many important chairman of various committees have all … left. This was prompted last month when the Tourism Minister basically told them to scram:

In a diatribe reminiscent of Mitt Romney’s disavowal of Massachusetts Heath Care, tourism minister Khamis Kagasheki warned last month that Ngorongoro officials would all be sacked.

So instead of waiting to get the boot, they left with the entire wardrobe.

Two immediate problems are likely. The first is that collection of fees is turning dirty. Many driver/guides will have more trouble getting in and out of the crater without excessive bribing. The second is that the local Maasai – stressed by a couple years of near drought – will flood the crater floor with cattle and the rangers – absent of a master – will do little about this illegal action.

If the trend isn’t stopped, then it will ultimately develop into a third more serious affront to this beautiful place: Poaching. Whenever the crater loses its shawl of organization, poaching skyrockets and often organized by the rangers.

This all started several years ago when Tanzania’s president organized several NGOs to look into helping the Maasai at the crater organize their cattle farming in a better way.

Suggesting something similar to a giant co-op, the President’s plan was grand on mission and scant on details. The mission was OK: vets and stockades and abattoirs and everything else that modern cattle farming needs.

And a ton of money was thrown at the project. And it has all evaporated.

This is nothing new in Tanzania, of course, and last month’s diatribe by Minister Kagasheki suggests there’s a still in his pocket. But it’s quite unusual that such an important tourist destination would be left completely rudderless, and this is Tanzania’s main tourist destination!

It’s another woeful sign that while many of Tanzania’s African neighbors are moving steadfastly towards more modern, transparent governments, that Tanzania is still stuck in the mud of a crater rainy season.

“Paradise Lost” is not something the casual tourists visiting Ngorongoro, today, will notice. Tanzania has been so corrupt for so long that somehow it moves on in spite of it, and tourist professionals know better than any how to manage the system.

But the need for careful ecological management of the crater is real and right now is MIA. This means over time the biomass will suffer.

It’s one thing when we conservationists in Africa deal with the daunting problems of human/wildlife and wilderness/development conflicts. These are tough, real issues. It’s quite another to have to deal with the Keystone Cops in control of Ft. Knox.