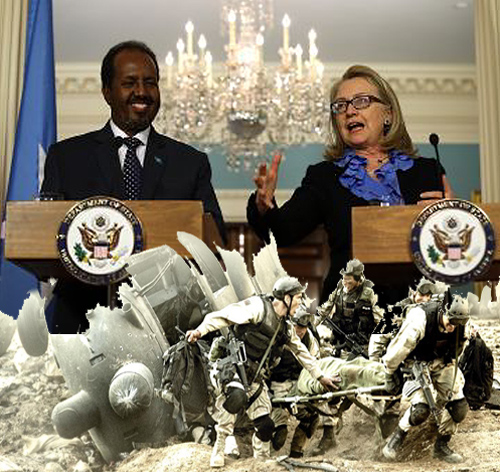 When’s the last time the U.S. fought a war in a foreign land that ended with a better society and government for those people and greater peace for all the world?

But before that, you have to go back to World War II. But yesterday the U.S. officially recognized the existing Somalia government after 21 years of on-and-off direct conflict.

Although far from tranquil or totally stable there is today a globally recognized Somali government for the first time since 1991, piracy is ending, farmers are planting, schools are open and the economy is growing. None of this since 1991. All this precisely because Obama “surged” our militarism there for the last two years.

He surged a war and won.

Them’s the facts, Ma’am. The catastrophe began with Bill Clinton’s cowardly response to Blackhawk Down and then a few years later, the Rwandan Genocide. Clinton escaped a couple close calls with oblivion as President, and I for one think he’s culpable for the last several decades of terrorism in the world. (With a good measure of French obstructionism as well.)

A sweet irony that his wife yesterday was the person in the spotlight recognizing Somali peace.

But Clinton and French responsibility for igniting global jihad had a significant catalyst with the end of the Cold War.

So many African countries were nothing but pawns in the Cold War. They were treated like ivory pieces on a chessboard, spit-polished when they advanced one sides game and ignored to the point of being sacrificed when they didn’t. The frontline battle was in Somalia and neighboring Ethiopia for 20 years before Blackhawk Down.

The U.S. and westerners pulled the puppet strings on Somalia, and Russia with occasional Chinese lace pulled the strings in Ethiopia.

Tens of thousands – maybe hundreds of thousands of people died in regular old tank wars on deserts with no more value than the sand that defines an egg timer. So for 40 years “Somali society” if it still exists was pulled and shoved and bombed and tortured as some unexplained pendulum flinging between good and bad.

The epoch Americans remember most is the one just ended: the epoch of terror when Obama’s surge in Afghanistan forced al-Qaeda principals to flee to Africa. After a short stint in Yemen they went to Somali where their much greater skills and far superior dedication to ideology gave them the tools to conquer the rat pack of warlords that had controlled what had been Somalia with the residue of weaponry left by the end of the Cold War.

The prize in that stealthy battle was the port city of Kismayo, the throne of the pirates, and the loot this provided al-Qaeda rebirthed them with new weapons, new roads, new infrastructure and alas was born, al-Shabaab.

Obama gives no quarter to his enemies. But he doesn’t like public wars. So with more equipment and better technology and not a few real American boots on the ground, America began battling al-Shabaab.

It was just the continuation of the Texas Ranger pulling up his red bandana to disguise his face and sticking his badge in his pocket so he can hunt down the Dallas bank robber who fled into Arkansas. But when it became clear that this clandestine operation wasn’t enough, well, he hired Kenya.

Well, that did the trick!

So now the al-Qaeda principals – what’s left of them – have fled into the interior and north of Africa. But don’t worry. The French talk better than we do in that part of the continent, so they’re taking control, now.

I’m of two minds about all this. The world – the whole wide world, including shipping and fishing lanes and air space – it’s all much, much more safe and peaceful today because of Obama’s surge against terror.

But my second mind is whiplashed by the memories of the Cold War, and how we used African societies as pawns in a game that was cruel and devastating to them.

It all remains to be seen. And perhaps my sarcasm is little more than spite of days gone bye.