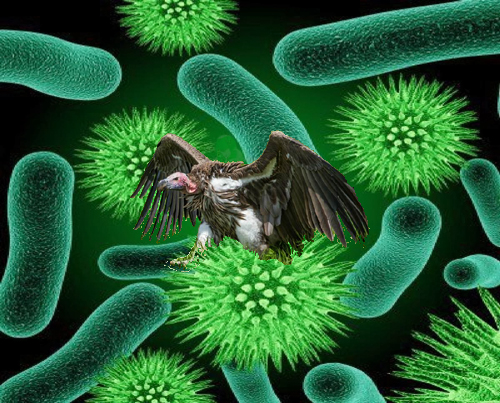 Less pain now let’s you choose a better burger for that last meal! Your puppy Fido will be all better in time for the apocalypse! Cataract surgery for vampires!

Vultures are in trouble, real trouble. More than half the species worldwide are going extinct. The main reason is a popular Novartis drug, diclofenac.

Hyaenas, feral dogs, raccoons and even sea gulls clean up road kill, but their guts don’t neutralize the microbes they then disperse into our world.

In grade-school speak, a vulture’s poop is clean. And only vultures’.

Evan R. Buechley of the University of Utah and Çağan H. Şekercioğlu of Istanbul’s Koç University recently documented what scientists regionally have told us for years: reduced habitat, active poisoning and sports shooting, but mostly the widely distributed drug diclofenac have resulted in 12 of the world’s 22 vulture near extinction.

Farmer poisoning is cultish. Sports shooting is immoral and everywhere illegal with regards to vultures. But remove Voltaren and other forms of diclofenac from the world market and vultures would be OK.

Diclofenac is manufactured by Novartis and was originally produced as a human anti-inflammatory drug. Ranchers found it useful for relieving various pre-abattoir conditions, and soon dog and cat lovers worldwide were using it for eye infections and other ailments.

It’s not an over-the-counter drug. A vet or physician must prescribe it. There are many alternatives.

So what’s the problem? Why are the presumably well educated doctors in our society prescribing this drug that will ultimately make all our lives worse?

Guess: It’s cheap. Rite-Aid sells Voltaren for $9.99. The online giant HealthWarehouse sells a 5ml of a Voltarin Opthalmic Solution for $13.00.

Buechley and Şekercioğlu’s study is chilling. It doesn’t just prove that vultures are being killed by diclofenac, it paints a terrifying story of what happens as a result to our ecosystem.

Because there’s no more dead meat lying around, we’re fooled. But the replacement scavengers don’t neutralize the horrible microbes carried by dead meat like vultures alone do.

In fact, “As vultures decline, populations of many facultative scavengers are growing, causing trophic cascades from increased predation, competition, and invasion.”

Take Africa, for example. Replacement scavengers like hyaena increased substantially and that led to more predation on human agricultural stock like goats. Vultures don’t kill. So step 1 in the onerous trophic cascade was the increased human/wildlife conflict.

Bad bacteria and viruses take a while in their battles against humankind, and that remains the main threat. Ebola and Zika, bacterial TB and other malicious microbial infestations take decades to unleash their better assaults.

I don’t think Voltaren used after cataract surgery or to stop Fido from whining necessarily ends up in a vulture’s gut ultimately killing that bird’s brood. But at the very least we should stop the large animal use of diclofenac. I’d rather see the sunrise than a perfect burger.