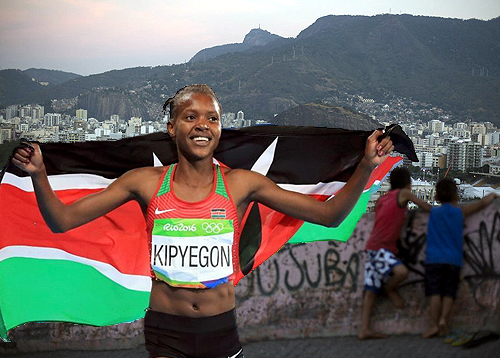 Haunted by doping, having to bribe to get their uniforms then left with no tickets home, the Kenyan Olympic team placed 15th in the overall medal list – the best ever for an African country.

And par for the Olympics. I can’t understand how anyone places a thread of trust in any privately organized world athletic organization.

The scandals which have scourged world athletic organizations in the last few years read exactly like the corrupt politics of an African nation, so even after the Kenyan athletes were stranded for several days after the games in a Rio slum waiting for money to get home, yesterday they were at State House posing with the President.

The story of Kenyan athletes reveals better than any other the unfairness of world sports.

Traditionally to become a world-class Kenyan runner you start by enrolling yourself in a loosely organized school in the Kenyan highlands run by an Irish priest.

If you prove good enough, the priest raises funds to send you to Boston or London or some other place to win a marathon, after which you’re on your own. World marathon winners hang out together in Nairobi and eventually become the Kenyan Olympic team.

They train only if and when they get enough money to go to places like Denver. Often supplied by their sponsors it’s a haphazard and often interrupted process. The sponsors even supply the uniforms and toothpaste! Only this time, athletes arrived Rio to discover that Nike’s generous kits destined for them never made it.

Apparently, they were “absconded” as they traveled through – or didn’t – some airport.

Once in Rio, the Sunday Times reported that Kenya’s head track and field coach agreed to accept a bribe in Rio to help certain Kenyans pass a problematic doping test!

He was ordered back to Kenya and arrested at the airport. But today he lingers free on bail, uncharged.

All sorts of presumptions explode from this one. First, did Kenyan athletes need to bribe? Were they doping? Second, is the coach walking the streets because he could pull so many others down with him?

Later another Kenyan coach “was sent home from Rio for improperly using an athlete’s badge and posing as a runner — even giving a urine test to drug testers — so that he could sneak into a dining hall for a free breakfast,” according to the NY Times.

Nevertheless, Team Kenya shined. They won 13 medals in track and field, including six gold and six silver and one bronze. Only the U.S. team did better. It was the best performance of any African team ever in the history of the Olympics.

After parading proudly in the closing ceremonies, the team was told there were no airline tickets for them to get home. Those veterans with enough sponsorship immediately made their own arrangements, but several younger members couldn’t.

So Team Kenya – the winningest team in African history — spent several nights in a Rio slum. Their managers, by the way, stayed at posh hotels in the city, complaining that it was the government Sports Ministry’s responsibility to buy the tickets. Right.

Everyday Kenyans are furious. Their President has promised a commission of inquiry. But the Olympic team managers and country committee remain in place.

Tumetoka mbali: “This is a statement of hostility and exclusion,” Kenyan commentator Gachuhi said of the Kenyan Olympic Committee’s mantra. Citing a long storied history of the bad people who run Kenyan athletics but who are immune to government oversight, Gachuhi basically threw up his hands in surrender.

The committee’s secretary general, Francis K. Paul told the New York Times, “We are not in the wrong,” adding that the committee would go to court to fight what it called “government inference.”

Smiling, he then reminded the Times reporter that only the International Olympic Committee had the authority to fire them.