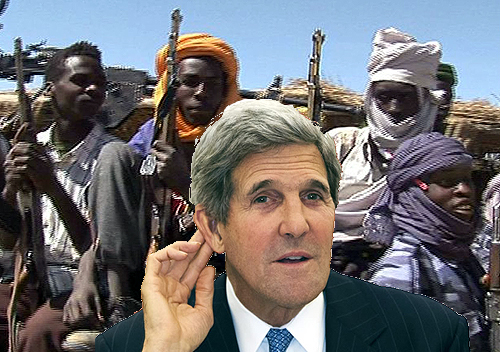 Obama is trying to be the Great Mediator in Africa having failed in America. Don’t hold your breath.

John Kerry is completing a whirlwind tour of Africa, today, dolling out money like carnival candy and telling the McCoys and Hatfields that they’ll be a lot more if they have Thanksgiving dinner together.

The Carrot: After slapping Kenya’s cheek for its unsolved series of recent murders of human rights activists, Kerry embraced Kenya’s two grand opponents telling them to stop squabbling about the election monitors that will referee their next great battle in a year:

“[The U.S.] does not favor one party over another. But we strongly support a fair, accountable, transparent, orderly, credible, non-violent electoral process and we will do everything we can to assist Kenyans as they work towards that goal.” Smiles. Smiles. Increased local bank accounts.

The Stick: From there he moved to the South Sudan which is probably the most unsolvable political mess in the world, today, which is creating enormous numbers of refugees, and which tilts day by day on a new era of genocide. What did Kerry have to say about all of this?

“[The U.S. may] have to rethink what we are doing,” Kerry told a local South Sudan radio station, “because we are not [going to] work with the government that is not willing to work with itself and with its own people.”

Jet-on to Nigeria, Africa’s largest economy and arguably most troublesome democracy. The U.S. has massively increased its aid recently to Nigeria as the new president, a former general, directs more and more resources into the military battle to defeat Boko Haram.

The Carrot: After commending a moderate Islamic Sultan for his religious tolerance Kerry added, “We also know that beating Boko Haram on the battlefield is only the beginning … Building public trust in government [comes next]. Extremism can’t be defeated through repression or fear.”

On the one hand you can’t really criticize messages of peace and reconciliation. But the deep fissures in the world, today – like the deep fissures in America’s own politic – aren’t responding to old remedies, to carrots and sticks. The world’s too polarized. Generalities and mediation aren’t working.

I think it’s time to fess up to reality. There is usually – not always but usually – a right side and a wrong side, and it’s time to say right is right, and wrong is wrong when it is.

Kenya’s 2007 election was unfair, in the same way that Gore’s defeat was unfair. It’s time to point this out to the Kenyans, to make sure the mechanisms that unfairly brought Kenyatta to his first term are eliminated.

In the South Sudan the current leaders are all miscreants, tribal when it conveniences them and renegades when it doesn’t. None of them, not the president or often changing vice presidents should receive any of our support.

In Nigeria we ought not pander to moderate Islamists more than we insist on a secular society. We have a good opportunity to do this, actually, since the current president is so inclined. But Kerry’s nice little visit to a “moderate Islamist” was not a the right signal to send.

I can hope that a decade from now I’ll wake up to a world at peace, to a U.S. Congress that is productive and fair, and to a variety of video media that includes something other than the race for the president. Oh, and that Obama was one of the greatest presidents ever because he was steady and true and a real believer in mediation.