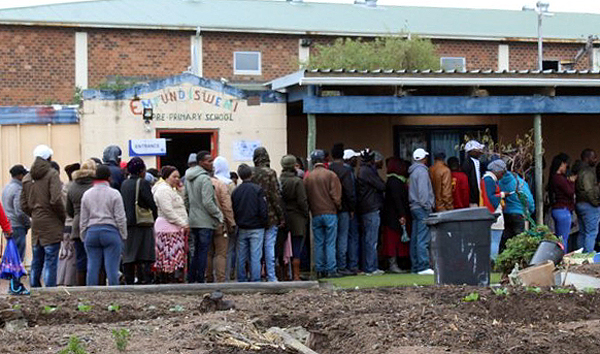 So far no surprises in the South African elections and quite possibly an affirmation that pre-election polling was correct.

Actual results won’t be known until tomorrow but there is incredible news: once again, nearly 70% of voting age South Africans actually voted. This is a vibrant democracy and it gives Americans pause to rethink exactly what we are.

You can’t call some place a democracy if the people living there don’t vote. It’s a potential democracy, and that’s all that America has been since the 1980s.

When 47% of voting age Americans participated in the presidential election, we political freaks were ecstatic. (There was a near 56% turnout overall, but almost one in ten voters declined to cast a vote for president.) As poor as these figures were, they were the best in a generation.

Would cell-phone voting do the trick? Otherwise, unlike South Africa and most of the societies in the world that call themselves democratic, we aren’t.

Virtually all developing countries’ democracies have high voter turnout. On the one hand this is understandable: the freedom to choose is new. Those who vote have waited years to be able to. So in actual African democracies, and not one-party show votes, it’s always considerably above half the registered electorate that shows up to vote.

This was South Africa’s 6th national election since independence. Voter turnout is over 70%. Kenya, which has had several very disputed elections but which has operated them mostly free and fair for a half century, has just under 60% turnout.

The trend is unmistakable among emerging societies: with time, voter turnout declines.

But that isn’t an universal trend. Some of the oldest countries on earth have the highest democratic voter turnouts. Belgium is nearly 90% followed closely by Sweden, Denmark, Australia, South Korea and the Netherlands. In Australia it’s illegal not to vote.

So maybe just a law, and not cell-phone voting?

The Pew Research Center did a comprehensive survey of voter turnout in what they considered the 35 most mature democracies on earth.

Click here to go to the site and fiddle with the data, but here’s the most striking piece to me: Of virtually all the countries surveyed, the difference between registered voters and citizens of voting age is the highest in the United States.

Nearly 87% of registered voters voted in America’s last election. But that was only 56% of citizens eligible to vote. That discrepancy is a democracy killer. It’s as bad as a 60-vote so-called “majority” in the Senate. America has so fiddled with its democracy, restricting so many people from voting, that it’s clear:

America is not a democracy anymore.

So let’s get on with it. Own up to what we are. Make Trump the King, give him more years in office or blowup the ruse. This is absurd.