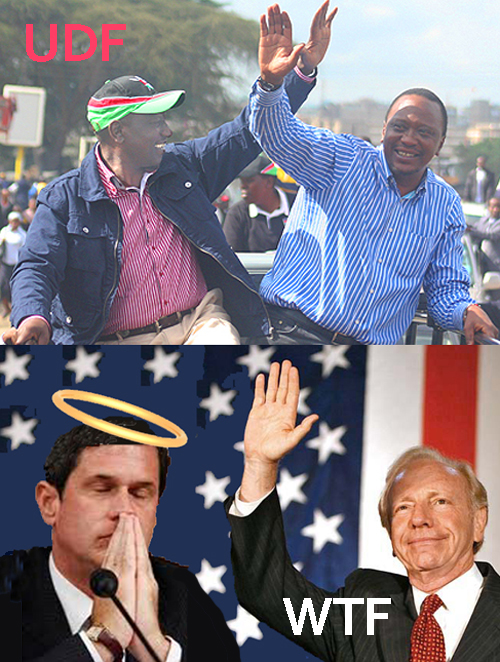 Politicians the world over are a lot smarter than we give them credit for. Take Kenya, for instance. Wednesday a new political party was announced, a reaction to the public’s intense dislike of current politicians. Should we follow Kenya’s lead?

The new party in Kenya is the United Democratic Front (UDF). Wow, that blew me away. At last, a truly representative group of savvy (all) men who are united in their respect for voter’s wishes. Now that’s a change. And they’re going to be in the front, too!

Sensitivity to the complexity of issues doesn’t mean you don’t need good marketing. I think these three-letter wraps are perfect. In the airline industry we’ve used three-letter codes for years to designate airports.

ORD is Chicago. LOL is Derby, Nevada. ACK is Nantucket. This helps us remember where we’re going to, if of course, we were sure we were going and that there would be an FAA (Fair trAffic Actors) to assist us.

Although the announcement yesterday was greeted by throngs of people nearly overflowing the covered bus stop at Uhuru and Kenyatta avenues, it was hard to figure out exactly what the new party stood for. Fortunately, Google helped with a simple UDF search.

The UDF clearly stated “it’s commitments to the people of Kerala to rise to their aspirations for Growth and overall development along with a peaceful living for the entire section of society.”

An obvious error in today’s main newspaper in Nairobi reported, “The UDF… is linked to some politicians associated with the G7 grouping.“. I and most of Kenya are unable to explain this, but we are waiting for them to add another digit or letter.

Perhaps, though, with my long experience following politics in Kenya, I can make an inference as to really why this new party was formed.

The two principle leaders of the UDF, crossing their waving hands in the photo above, are (left to right, or vice versa depending upon which photoshop or political analyst you use) is Prime Minister Uhuru Kenyatta and suspended Higher Education minister William Ruto.

I for one would be concerned that their travel schedules might disrupt their local policy planning. They are traveling back and forth to The Hague quite a lot, since they are both indicted by the World Court for crimes against humanity, and the vast majority of the Kenyan people refused to allow them to wiggle out of that one.

Both men have crossed existing party lines and old ethnic barriers to form this new party. This carries on the tradition they began during the turbulence following the 2007 election when (allegedly) they both recruited thugs often not in their own tribe to shoot police, club clergy to death and set fire to buildings.

Now the question comes home. Should we follow Kenya’s lead? Perhaps Senator David Vitter could start a new WTF party. He might go to jail, soon, too.

And then there’s that other senator, Joe Lieberman self suspended from the DEM but unwilling to join the GOP for GOK (God Only Knows).

That’s a team, now! Vitter and Lieberman, or Lieberman and Vitter, just like Ruto and Kenyatta (or Kenyatta and Ruto).