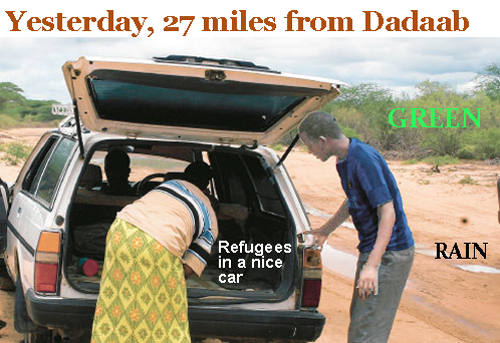 Folks, it is drizzling near Dadaab. And it shouldn’t be. This is normally a dry season. We’ve got to understand again and again that this terrible famine is man made. It is not the work of God.

Yesterday I listened and watched to report after report, including from Kenya itself, decrying the “60-year drought.”

There is no 60-year drought in Kenya. What there is, by the way, is more important: a famine of extreme proportions. But it is not caused by drought. And all the western journalists flying into the dusty desert for the first time aren’t checking facts.

The Dadaab refugee camp is not overflowing with starving people because there was no rain. There is no drought that caused this.

Here is NOAA’s report of rainfall in the area for the month of July just past. This is the area to which all the foreign correspondents are flying in northeast Kenya, southern Somali. In a normal year, these areas would be completely white. From about the end of May to the middle of November, for the last hundred years, not a drop of rain falls.

And now, it seems at least for the moment, it’s raining. Study the picture above. It was taken by Agence France Presse yesterday near the Kenyan town of Liboi, which according to GoogleEarth is about 27 miles northeast of the misery center of Dadaab.

There are pools of water. There is green grass. There is an automobile, although the AFP caption for the picture reads “Somali immigrants repair a tyre 2km inside Kenya enroute to Liboi. There are few who can afford to pay up to $150 to travel from the capital Mogadishu.”

Here is NOA’s prediction of expected rain for next week. Good news, of course. White overlaid by brown and even green shades showing pretty intense drizzle for the desert in a dry season.

What seems to be happening this year is a shift due to climate change of the rainy season that usually occurs March – May, to now. The March-May period was dry.

But understand this, please: A single missed rainy season cannot possibly cause such misery. Unless..

…there’s a vicious war just now getting worse… there’s a world recession that has so increased food prices that normal development aid is collapsed into fractions of its worth… there is political tension in the area so that bumper harvests (in Tanzania) are being prevented from shipment to the areas in need.

All the above are true. Add the real stress caused subsistence farmers who are disconnected from their normal planting routines by climate change, and you have … famine.

There is real, significant, terrible famine. We are approaching a half million people starving in the area of Dadaab … where it may be raining.

Uniquely as always, Jeffrey Gettleman of the New York Times, is reporting the truer story. And he is located exactly where the famine is really being caused. And that is not Dadaab. It’s in the heart of the battle for Somalia.

Gettleman makes the same mistake everyone seems to be making: calling a huge area “the worst drought in 60 years” which, sorry to have to repeat, it isn’t. But this is buried deep in his story which is otherwise right on. He explains the catastrophe as a political one, not a climate-made one.

A number of you have emailed me asking me for advice regarding how you can personally contribute best. I’m not the one to ask. Click here for better recommendations than I will give you.

My recommendation is one you probably won’t expect.

Become political and support leaders who understand a world order. Spend significant resources to defeat T-Party like mentalities that refuse to ameliorate world suffering with even a penny of the rich.

This famine is man made. I’m not for an instant suggesting that American conservatives have caused the war which caused the famine. Quite to the contrary, if anyone caused it, it was Bill Clinton.

His sheepish retreat from dealing with the mess in Somali because of the political flack he got from BlackHawk Down is the main reason for the problems, now. Almost 20 years ago, we now see the damage of short-term political gain.

This isn’t a left or right issue. It’s an issue of simple long-term compassion. Unless we get our heads screwed on right and steadfastly so, there’s going to be famine at Thanksgiving in the rain forest.