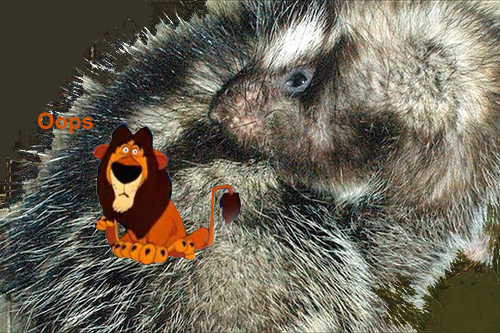 Porcupines are common in East Africa, but more often we thought we saw only smaller ones that we presumed were juveniles, even though they always seemed to be alone. On closer inspection, they turned out not to be porkies, but giant crested rats! This week we learned how fascinating this creature is!

A famous East African scientist published a few days ago the remarkable story of this little creature, putting it on a pedestal of evolution well above many other animals.

I often explain on safari that if you reduce all goals in life to one, it’s defense – how to survive all the external efforts to destroy you. Africa has an amazing array of animal defenses from the sheer savageness of the honey badger to the heavy coat of the waterbuck that tastes so bad no one wants to get near it.

But this little creature, Lophiomys imhausi, has a defense that tops most others. Even at the first level, that its predators appear to get sick just looking at, scientists had trouble figuring out what was going on. But then, like the waterbuck, it was discovered that the creature’s hair was toxic to most of its predators.

The waterbuck secretes a musky oil. At first that’s what everyone thought the crested rat was doing, too, but it wasn’t. Its story is a remarkable lesson in extraordinary convergent evolution!

Little Porky chews a poisonous bark (that somehow doesn’t effect him), his saliva somehow reduces the soup in his mouth into a powerful poison, then he licks it onto his back.

And his back – those otherwise nondescript “crested hairs” – are made in such a unique way that they are specifically designed to absorb this specific concentrated poison.

And – critical to it being a successful radiated defense in natural selection – the poison doesn’t usually kill, just makes the predator very, very sick. So the predator not only won’t go near it, again, but can transmit this learned caution to siblings and offspring.

Imagine this. There were separate, ultimately converging evolutionary tracks: first, the ridiculously otherwise useless evolution of the hair structure; second, chewing of a plant but not for food so a craving by the creature to imaginatively but only partly consume something; third, (and I think most remarkably), the evolution of a poison in a plant where the creature lived that was just the right molecular structure that it wouldn’t kill but make very sick this creature’s predator; and fourth, the creature’s digestive system evolved to be immune to the poison in sync with its not wholly consuming it.

Wow. And there are probably many more lesser obvious biological evolutionary processes at work, too.

Consider that all these developments happened independent of one another, and essentially by chance. The only way any of this is comprehensible is to grasp the sense of time given this creature and its antecedents to create themselves.

That’s to me the greatest marvel of evolution: the backwards understanding of the length of time needed to let all these chances happen.

Of course there are evolutionary processes more complicated than this: what we call “malaria” is actually a sequential interaction of metamorphosing creatures (sort of caterpillar to butterfly types of life forms) that perfectly disrupt and destroy metabolic processes in humans.

But the crested rat is right out there to see! And in the panoply of seeable animals, this is pretty swift stuff!

I always knew not to mess with porky, so I never messed with Little Porky either (Jonathan’s petting not known), but I always presumed it was for the same reason: spines like the porkies. At a distance when light is shined on it (it’s a nocturnal creature), its crested back hairs erect just like porkies do.

But up close, which I’ve been able to do only once, the similarities are lost. They’re really hairs, not spines, and the overall creature is smaller. A porcupine can be 3 or 4 times larger when puffed up in defense.

Yet they both act the same way! Confronted, they turn towards you and raise those weapons on their back!

This amazing puzzle has been brought to us thanks to a famous scientists whose life has been dedicated to East Africa, Jonathan Kingdon. His library of books on Africa biology is large and includes field guides that guides like me have been using for years.

Kingdon told journalists that he kept crested rats as pets when he was a child growing up in East Africa. Finally, he decided, he had to figure out this incessant licking it always did, and simultaneously, why dogs that might see his pet would back away in horror, sometimes foaming up with saliva.

Now we know. One more little but absolutely amazing puzzle of life solved!

And thanks, too, for friend and client Mike Samars, for pointing me to this story.