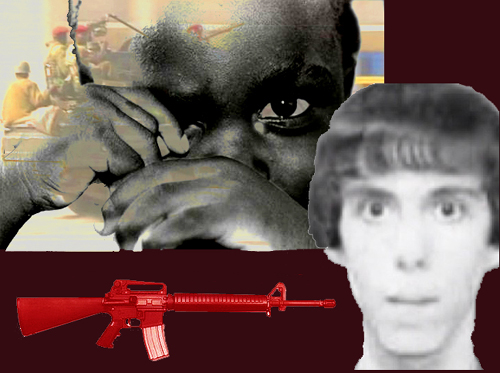 My daughter is a teacher in the Brooklyn, and as I heard the news Friday I was viscerally distressed in a way I’m not when reporting deaths in Africa. Why?

The explanation is terror. That word has come to assume new meanings in my lifetime, but essentially it means a feeling of intense fear without explanation. Humans don’t like unexplained things, and especially unexplained fear.

When we as Americans read of the murdered African children we feel no terror. First, it is far away, not just geographically but psychically. It’s in a place that we believe is less civilized, much poorer and less capable of protecting itself, and often Americans believe organized by corrupt governments.

The implication is that such horrific events are to be expected in Africa.

But not in Newtown, Connecticut. It’s only 45 miles from New York. It’s an affluent community with layers of security. Its leaders and politicians are all nice, upstanding people, working for the better good.

So it makes no sense in Newtown. We think it makes sense in Baragoi, Kenya, or Otitie, Nigeria but not in Newtown. And even if it didn’t make sense in Africa, Africa’s too far away to matter to us.

What matters to us, is us.

And it’s precisely our definition of “us” that goes to the heart of the matter. Americans so far don’t want to define “us” as much larger than a small community of their own family or neighbors. So they certainly can’t extend the “us” to Africa.

That inability to expand the definition of “us” is partially the cause of the Newtown tragedy and even of the tragedies elsewhere in the world and as far away as Africa.

No sane, decent person anywhere in the world would continence the violence in Newtown or Otitie. And there are fair and just ways to prevent such violence. But prevention in even its mildest form and no matter for what purpose – even prevention from buying bacteria infected food from a grocery store – is only possible when individuals give up some of their own rights.

And that’s where America is so far behind the rest of the world, even Africa. We are so obsessed with individual rights and so terrified that some authority will force us to do something we don’t want to, that we are steadfastly reluctant to sacrifice for the better good of the community.

And it has a horrible corollary. When a handful of men in turbans blow up the World Trade Center, our response is to blow up two entire countries wholesale with their civilizations in a vengeful response. We can’t parse the hundreds of millions of individuals who are “foreign” into the myriad levels of good and bad.

Osama is Afghanistan is Iraq. It’s all one thing: We have to think of society as groups of “us”es with no variation within.

Gun control is an obvious partial solution to America’s epidemic of mass murders. By the way, that’s the same partial solution for stopping African carnage. Since most of the world’s weapons are manufactured in Russia and the U.S., it’s a rather simple coalition.

But gun control – much more than protection against bacterial infected salmon – requires an expanded definition of “us.” Sadly, I just don’t think my America is mature enough yet for that.

I hope I’m wrong. But I know until we can achieve such a small step for ourselves, the chance of our participation in assisting the world order as a whole is next to nil.