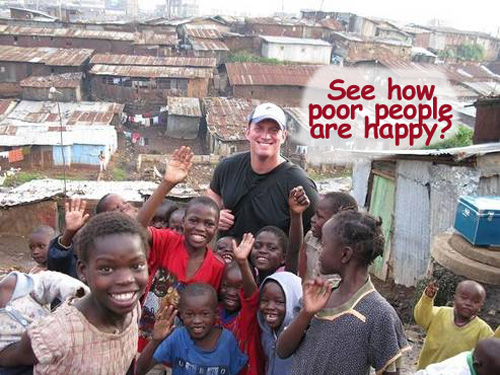 Death, destruction, despair and poverty … all for an attractive price! For less than $30 per person you can be guided into Kenya’s most famous slum! Kibera Tours dot com. “Experience a part of Kenya unseen by most tourists: KIBERA The friendliest slum in the world!”

The half-day sightseeing trip in Nairobi promises to visit an orphanage and school, a bead factor and a typical Kibera house before the piece de resistance: the biogas center: “a fantastic view over Kibera and picture-point. You can see that also human waste is not wasted here.”

This is disgusting. Tourism at its worst and most exploitive, revealing the basest inclinations of ourselves and reenforcing ridiculous notions that poverty doesn’t exist at home.

Kibera is the largest of Nairobi’s 7 or 8 slums, which slip around the city in endless tin and fumes. Not even the Kenyan government census can estimate the size, but the best guesses I’ve seen put the slums at several million people compared to the residents in the city at around 3½ million. The slums are a dissimulating fraction of greater Nairobi and would be an incessant inferno in the developed world.

But in Africa they maintain an unusual tranquility. To be sure crime is endemic (see the film, Nairobi Half Life) and ethnic feuds that plague Kenya from top to bottom can produce particularly vicious moments here, but unlike slums in the developed world there is no boiling cauldron of the poor ready to murder the rich.

Nairobi slums are often stepping stones from poverty, completely unlike the imprisonment of slums in the developed world. Emigrants from impoverished rural areas without proper education or training live for a few years in the slums and develop the minimal skills needed to work in the modern world.

Then they move up and out. Not yet has Kibera fashioned a whole class of people forever imprisoned like the old Harlem or Cabrini Green in the U.S., or the Cape Verde barreos of Lisbon. Kibera will indeed become another Cabrini Green if something isn’t done this generation. But for the moment, the slums are relatively too young to have become a blighted institution.

Nevertheless, they look the same. And the nuance I argue above is not something that can be seen on a short visit. But slum tourists don’t come looking for hope.

What do they come looking for? Why does a tourist pay to come here?

I’ve asked myself the same question time and again. It’s identical with the wish to “see a village.” That quoted remark, of course, is an euphemism for seeing dirty bomas with mud huts and animal excrement. Fortunately, by the way, such villages are rare to find, anymore, at least along East Africa’s normal tourist circuit. What has replaced them are sedentary replications intended to make money from tourists.

Why do tourists pay to see them, even though they are clearly not authentic?

Even though outstanding African economic growth and potential is in fact a topic often found on the pages of the Wall Street Journal, I still hear from parents, “I want my children to see the way the other side lives.” Or “I think it’s important we see how fortunate we are.”

You don’t have to come to Africa to “see how the other side lives.” In some places like southwest Wisconsin near where I live, or the Ozarks or Appalachia, or the residual slums of our urban cities, real poverty and its resultant despair and destruction is no less than Kibera’s.

America’s “Kiberas” are not as widespread or large as Kenya’s, that’s true. But this is not a fortune of chance. It’s the result of a human civilization that wants to give everyone a modicum of happiness, that cherishes human rights.

That’s what America was mostly about, and it’s now what the world is mostly about. Kibera’s existence is our failing, just as Cabrini Green was and Appalachia still is.

Poverty is so complicated that it easily befuddles, and I think that’s part of the tourists’ desire to see Kibera or “a village.” They want to simplify the complicated. They don’t want to see poverty as something relative, but clearly defined and for sure, Kibera is.

But there is the same, absolutely identical misery, disease and angst in the unemployed, castaway homeless veteran on the streets of New York as any child walking the mud paths of Kibera.

Kibera, or the imagined dirty African village, or the homeless veteran need not exist. In a world where you and I assumed our basic human responsibility to our neighbor, there would be no Kibera.

If one child is poor; if one veteran is homeless, it’s wrong.

And finally — possibly even worse — the delusional tourist wants to find a smiling child who is dying, so that they can believe that poor is OK, that homeless can also be happy, that death smiles.

It’s OK to live in a multi-million dollar mansion and it’s OK to dab yourself with Chanel. But it’s not OK to live a world that allows Kiberas to exist. Kibera’s existence is our fault; the collective fault of an unjust world order. The children of Kibera can just as easily be the children of Trenton.

It’s not OK to go through life with the fantasy that Africa is besmirched and cursed and that Kiberas exist only in Nairobi and Shaker Heights exist only in Cleveland.

And it’s not OK to think that poor is OK, anywhere. There is no happiness in being poor or homeless, whether in Kibera or 49th Street.

Don’t come to Africa to validate your own fantasies.