At home whether it’s raining or not doesn’t mean much. On safari it means a lot to me as the guide. What we do, when we do it, planned months ahead, is predicated on where and when it’s going to rain. That’s now near impossible with global warming.

We were all having drinks tonight before dinner at Swala Camp in Tarangire when the thunderstorms began. Chris Benchetler left the room to try to get photos, and in fact the heaviest rain seemed over. Everyone was scrambling for umbrellas which the manager was fetching from some far away storehouse.

This is supposed to be the driest time of the year. We flew into the Serengeti through a terrible thunderstorm. Where we landed was so dry that your lips cracked even before getting out of the plane. Yet we could see some of the heaviest rain imaginable less than 5 miles away.

And today in Tarangire, in what’s supposed to be the driest time of the year, we got nearly 3 inches of rain in less than two hours. We ate dinner in Swala’s beautiful open-air dining hall with the moisture of heavy rain filling the veld.

I watched black paradise flycatchers doing their mating dance as if it were March! What’s going on? Global warming, and while it may make my job more difficult, I dare not imagine how it’s screwed up Tanzanian farmers. 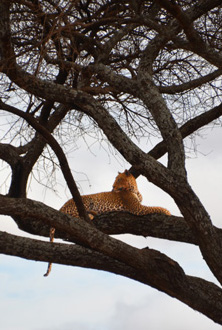 The leopard to left was photographed by Sue MacDonald, today, in Tarangire near the Silale swamp. Before the morning was over, we had seen five leopards, including two 2-month old cubs. Now that was a bonus. Leopard don’t usually like their cubs seen by a dragonfly much less a tourist, although admittedly we were several hundred yards away. 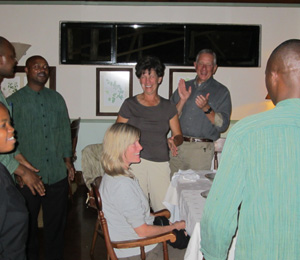 Sue by the way celebrated her 24th birthday with us on our safari (or was it 25?) We had a riproaring evening at Gibb’s Farm with the staff singing Happy Birthday to her. Lynn and David Heiman are joining the chorus!

Gibb’s as always is one of the most favorite stops on safari. The rooms are spectacular by East African standards, more like a fisherman’s cottage in Nantucket than a safari room. The setting in the Ngorongoro highlands reminds many of Tuscany, and the organic food on the farm is stupendous.

Tarangire is known for its ele, and we were certainly not disappointed. I have a long history with ele as you readers of my blog know, and I’m not exaggerating to say that the numbers we saw in Tarangire this time surprised even me.

In the Silale swamp alone we probably saw a thousand. Now by Charles Foley’s latest count, that would mean a quarter of all the ele in Tarangire, and I suppose that’s possible. But it was absolutely magnificent. I wish I could show you a picture, but really no one in our group — including some rather accomplished photographers like Roger Gelfenbein — were capable of giving me a photo that worked.

So you’ll have to let your imaginations soar with this little snapshot I took of Sue, Roger and Ellen Sirlin watching just one jumbo yesterday.