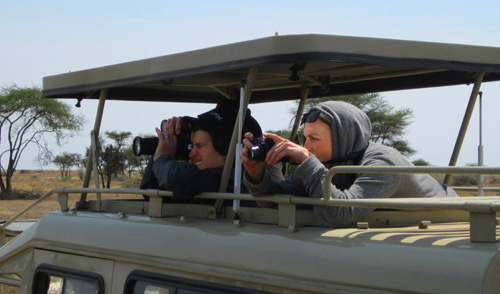 Ski pro Chris Benchetler and new wife, snowboard pro Kimmy Fasani, were dressing like they were on the slopes not the Serengeti! But guess what, it can be cold!

No matter how hard I try, no matter how much our literature tells people to DRESS FOR COLD, most every traveler just presumes that Africa will be hot and uncomfortable. Sometimes, it is. But often, it isn’t! Chris and Kimmy were decked out in all their sponsors’ attire (which, by the way, is quite good). But quite a few of my other travelers were cold! 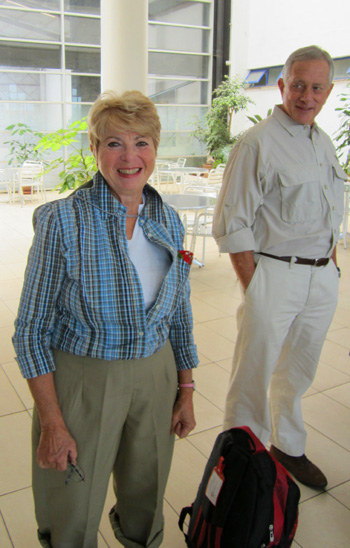 Now on the other hand, get this. True to form and all our warnings, one out of twelve of my travelers arrived without luggage! Ellen Sirlin had also been foiled by the unusual 9/11 baggage restrictions in Heathrow, so she didn’t even have a survival bag.

So Ellen and I went out on the streets of Nairobi and spent around $65 on a safari wardrobe for her! Well, I should say the beginnings of a safari wardrobe. Take a look at the left at Ellen’s “safari attire.” With only a few hours, she mustered a sewing kit, scissors and an iron and turned some raw stuff we found on the street into a rather stunning look.

David Heiman is admiring her … in clothes that came with his luggage. 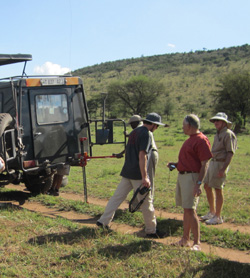 We’ve had way too many flats already this safari, 4. I normally get one or two. Tumaini says it’s because he decided to try a new brand, and well, obviously it didn’t work.

Traditionally safari tires were tubed. That’s because they’re easy to fix that way. But lately we’ve all been buying the new tubeless, and they really ride a lot better. But of course, each puncture in them is a lot more difficult to fix than on a tubed tire.

Another thing: travelers understandably always want to know how long it’s going to take to get from point A to point B. Well, you can see from this photo, the right answer is “it depends.” 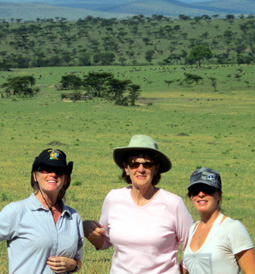 Sue MacDonald, Margy Gelfenbein and Kimmy Fasani posed for me in front of the migration in northern Tanzania. I’m not a very good photographer and just have a tiny snapshot camera, so I have to explain that the micro dots in the distance are the migration!

But note how green the veld is, and how beautiful the travelers are!