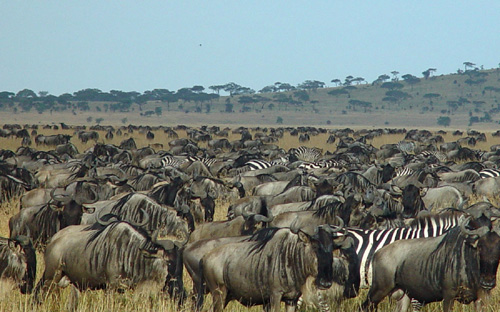 It’s very hard to know how much to push yourself on safari, and it’s difficult for the guide to know how much you really want to. Today we found the migration in northern Tanzania – it was an absolutely Number Ten experience. But it was psychically expensive.

We left camp at 815a and we returned at 645p. The object of the day was to find the migration. The safari plan is to experience the migration at the end of the trip, in Kenya’s Maasai Mara, but a couple people were leaving the trip early and the simple drama of the notion we could see the migration earlier in Tanzania compelled everyone to try.

The rains have been unusual. (Hardly news, eh?) If they weren’t the vast bulk of the migration would have been out of Tanzania by the end of July at the latest. And it wouldn’t normally begin to return until a little bit later than now.

But as I’ve often written, global warming has a net increase in wetness to the equatorial regions. It’s sometimes hard to understand when all that’s in the newspapers is the “worst drought in 60 years” but consider our own situation in America. Texas has the “worst drought in 60 years” but the majority of the country has been unusually wet. Ditto for East Africa the last few years running.

The terrain in northern Tanzania is identical to Kenya’s Maasai Mara. Same altitude, same rolling hills, same rivers and creeks, and when wet, same beautiful grasslands. So for the last few years, the migration has often lingered longer in northern Tanzania or returned earlier from Kenya.

In fact, what I think is actually happening is neither. I think the range of the northern migration is spanning out south to north. That means less of a concentration anywhere, but a larger area of thick wildlife.

Whichever it is, quite a few Tanzanian companies have bet it’s going to continue. Once up north we passed six new semi-permanent camps erected at great expense far from a southern supply source, to cater to travelers wanting to “see the migration” in Tanzania.

Where we believed from on-the-ground info the migration could be seen was 150k from our camp on Mukoma Hill in the central Serengeti. The roads up to the area weren’t bad, so it mean we’d have a day of about 6 hours just traveling (3 there and 3 back), albeit through game areas.

But if we were to keep focused it meant we had to race right bye other great things!

We were out of camp hardly more than 20 minutes when we came upon a pod of hippo in the Seronera River. People began to click away, and my driver, Tumaini, knew that he had to keep them moving if we were to reach the northern Serengeti early enough to enjoy it. So he hurried people along.

Right around Seronera the veld was remarkably green. In fact, I presumed it would continue green and damp all the way north and so I began to worry what effect this unusual weather might play on the traditional March/April migration safari. But hardly before I was done worrying, we had entered a prolonged period of dryness, typical for this time of the year.

That dry swath continued all the way from the western road junction past Lobo almost to Balaganjwe. But then near just south of the Balaganjwe west of the Megogwa Hills the veld turned beautiful lemony yellow. Grass was everywhere, and so were wilde! This was about 10k south of the Sand River gate into Kenya (Maasai Mara).

We then used the Tanzanian park services’ new roads and tracks to follow the Sand River northwest to where it merged with the Mara right on the border. Kenyan travelers will know this as the “Mara Bridge” area. There were wilde everywhere, on both sides of the river. We watched a river crossing over the Sand River which was quite exciting.

Except for the green veld this far south, everything else looked pretty normal. The Sand River was dry at times, and the Mara though flowing nicely was not unusually high. We didn’t see many crocs; I had the impression they’d already eaten, but there were many nooks and crannies of the rivers that caught hunks of dead wilde with lots of birds.

In addition to the migration, my travelers saw for the first time both eland and topi. We’ll likely get them both in the crater later on, but it was an unexpected bonus for many.

We were diverted from lunch, once again on this safari!, by lion. A beautiful tree we had picked out at a distance on a hill that gave us great views had already been taken by four beautiful, fat and sassy young lion. Some great pictures!

So after lunch we went a little bit further but then had to turn back in order to get home in time. So all told, we had about three hours of great migration viewing.

But it was a very, very long day. And given that most of the veld is normal, that meant very dusty and very bumpy. Parks services fix roads right after the rainy season, but now with intermittent and often heavy rains at unusual times, the roads grow bad more often than before. And there’s either not enough money or willpower, or both, for the parks to maintain the roads more often.

I know that at least half my travelers this time wouldn’t have done it otherwise. Roger, Chris and Kimmy, and Sue were pretty ecstatic about the day. And it’s a hard call to make for the guide to even bring up the subject, because inevitably there are going to be travelers who join the pack when they really don’t want to.

But all told I was pretty satisfied. It was a truly beautiful sight. Nowhere near as crowded with other tourists and vehicles as in the migration areas in Kenya. But do we presume this will happen all the time, now?

As a betting man, I’d say yes. But wait for our report on the migration in Kenya, which ends this safari! Getting to this area of northern Tanzania is costly, time consuming and for some, stressful. In the end is it worth it? Stay tuned.