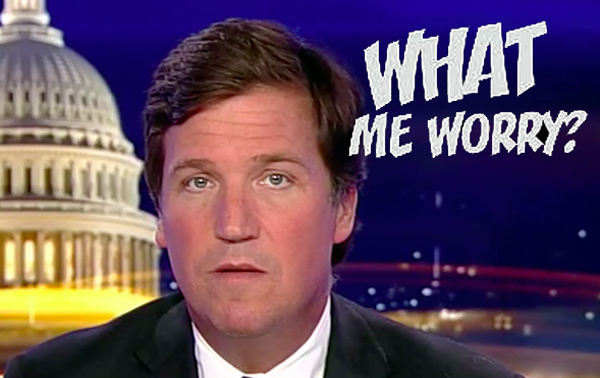 Let’s say you’re the chief astronaut on the Mission to Mars. Let’s say you’re 4 months into your 7-month journey. Would you take an 8th grader’s advice on where to make the next turn?

The very complex and explosive issue of land redistribution in South Africa was horribly confused and totally exaggerated yesterday by a Tucker Carlson Fox News lie which Donald Trump picked up and tweeted. The Rand fell. South Africa is now more furious with America than ever. What’s going on America? Don’t you have enough to lie about?

We have to spend so much time these days calling out lies, so my apologies in advance, and if you don’t need the evidence of the next couple paragraphs skip down to “1.”

“I have asked Secretary of State @SecPompeo to closely study the South Africa land and farm seizures and expropriations and the large scale killing of farmers. South African Government is now seizing land from white farmers,” Trump tweeted yesterday.

The twisted tweet followed a Tucker Carlson Tonight report that “South African president Cyril Ramaphosa has just begun the process of seizing land from his own citizens, without compensation, purely due to their skin color. That’s far more racist than anything Donald Trump has ever done, of course, but elites in America barely even care.”

Carlson took his queue from a far right American group, AfriForum, that maintains apartheid was good for South Africa and suggests it could be a meaningful policy in the United States.

1. South Africa has not begun seizing land. Even were Parliament to pass an unthinkable law like that this instant, it would take years to go through the courts.

2. In Parliament yesterday, president Ramaphosa said that he was unequivocally against the nationalization of land. What he appears to be slowly moving towards is an expropriation of existing national or tribally held land, or commercially held land (giant corporations that have consolidated small farms). This is something already mandated by the 1996 constitution but never fully implemented.

Land redistribution is a really hot issue throughout all the emerging countries of Africa. But South Africa “is not going down the Zimbabwe or Venezuelan path” the Council on Foreign Relations concludes in an excellent short review of the matter.

It’s a really hot issue because there aren’t ‘Indian Reservations’ for indigenous people like in the U.S. and Canada, and the state has not had time to develop negotiations that lead to huge settlements of cash and land redistribution, as in the U.S., Canada and Australia with their indigenous people.

So essentially South Africa is going through now what the developed countries have already gone through. The numerous tribal agreements of the latter half of the 20th Century transferred unimaginable amounts of wealth and land to indigenous people in the Americas and Australia. South Africa is newer. It’s just beginning this.

It’s a hot issue because there are more modern and disciplined political forces in South Africa that do truly want all land to be nationalized and they are a sizeable minority. This reflects modern times as citizen frustration with income inequality grows.

“For those who feel let down by democracy, issues of racial inequality, economic transformation, service delivery, crime, corruption, reconciliation, unemployment, the painful past and hopeless present crystallised into something that now seems both a tangible and attainable hope: Land,” writes South Africa’s Daily Maverick today.

As the debate intensified early this month the ANC — the dominant political party — got Ramaphosa to agree that the constitution should be amended as a way of staving growing popularity for the parties promoting radical nationalization.

But that agreement called for a prolonged period of analysis and gave little hint as to exactly how the constitution should be changed. I think that was intentional. I believe Ramaphosa and the ANC will reverse this decision if they can successfully dominant the further left parties in next year’s elections.

The South African government, tribal trusts (enormous ones in Zululand) and massively held land by religious groups in Africa is more than enough land for redistribution if it comes to that.

But it probably won’t, and I really hate to disappoint Tucker on his hope for a Pulitzer.