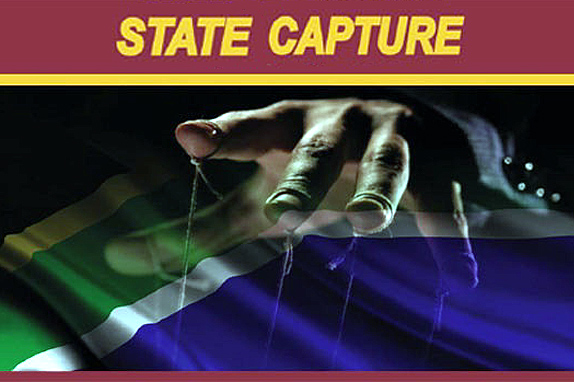 “State Capture.” No, that’s not a Russian transliteration or a jeopardy clue for the boardgame, Risk. It’s a South African English phrase describing the nefarious control that mobsters, international arms dealers and flagitious politicians held over the South African Republic for 9 years.

It took nine years for the Forces of Good to get their act together and oust Zuma one year before his final ten years in elected office. It’s taken them another six months to sweep up the political detritus and put together a plan for sorting out the recent past.

Standing over it all is South Africa’s John Kasich, the current president Cyril Ramaphosa.

Listen. It’s not easy to sort out the trash from the gold dust. Zuma caused such mayhem during his reign, so flagrantly ignored government institutions and public policy, that just putting hundreds of offices back together took months. Many, many civil servants fled … some for their lives!

That plan is the Zondo Commission, not unlike the Mueller Commission, and those are the proceedings that began yesterday. Other court battles – as you would imagine – have already begun against Zuma and clan, especially his eldest son. But the Zondo Commission is intended to thoroughly define the despicable era that hopefully has ended, and to prepare prosecutors for what will be years of continuing assault on the thugs who controlled South Africa for so long.

We’re talking about forces of thousands on each side. Of course there were the kingpins like John Kelly, the masters like Mitch McConnell, whose behavior got so flagrant towards the end of Zuma’s regime that culpability precedes their every word.

But there were dozens of lower officials and contracted persons who very knowingly did very bad things, very illegal things. But sorting these Devin Nunes from the equally many stupes like Paul Rayan who might not have intended to do wrong but did, is going to be very difficult.

So many people became involved with the Forces of Bad over nine years that they’ve become a legitimate political opposition in South Africa. They are close to controlling the dominant party, the ANC.

To many it’s remarkable that the ANC still exists. It’s possible that after the Zondo Commission is done with its work, it won’t.

There’s no indication that the Mandela years of gentle “Truth and Reconciliation” will provide any roadmap for the Zondo Commission. South Africans are mad. They want blood.

So let’s see how justice works our in South Africa. I really believe it presages what will happen in America:

For sure the Zuma family is doomed. No trial will be needed to beggar them or their closest associates and counselors. They’re already condemned to social and cultural exile.

But the question is will they end up behind bars. Will the so-called entrepreneurs who plaintively squeaked that they were just doing business end up in prison? Will the politicians who’ve already lost their constituencies also lose their freedom?

“The Zondo commission of inquiry is a remarkable symbol of accountability in action and of the triumph of the rule of law over the forces of capture in South Africa,” the nationally respected journalist, Ferial Haffajee, writes today. “South Africa is exceptional in post-colonial democracies for putting State Capture on trial.”

Yes, true. But as I asked, how much blood is needed to cleanse nine years of hell?