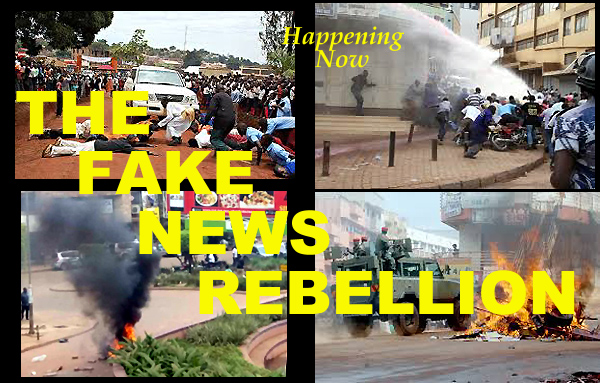 As I’m writing this protestors are being shot and killed on the streets of Kampala, Uganda, in what boils down to a rebellion of Fake News.

In fact, the president of the country in trying to quell the growing uprising has invoked Donald Trump as a supporter. The energy is so intense that it’s spilling over the western Kenyan border.

Uganda has been a dictatorship for a long time. Persons who live in the urban areas, including the modern capital of Kampala, basically have enabled the dictatorship through a series of very flawed and then not disputed elections. This is because urban Uganda is doing well. Rural Uganda is not doing well, and especially because of Museveni’s treatment of it.

The dictator, Yoweri Museveni, has restricted his ire to those who directly oppose him, and to a certain extent, has allowed public dialogue to at least slightly shape government policy. In this sense he mirrors the behavior of his fellow dictator and neighbor, Paul Kagame of Rwanda.

Because both Kagame and Museveni have kowtowed to the American Right, and because the American Right has held power in America for a while before Obama and a while after Obama, both countries have received generous aid from the U.S. Some argue that this, too, has impeded their ire.

But to their expressed opponents they are ruthless. Kagame has had killed several pretenders to the presidency. Museveni prefers to torture them and try to elevate them into a kind of public rebuke. His most recent opponent was a celebrity singer who is known mostly by his stage name, Bob Wine.

The previous most tortured opponent was Paul Besigye. Besigye has been tortured so much over the years it seems he has given up.

So when Bob Wine was arrested last week, held for four days and then released to his lawyer, the press was waiting.

What they found was a man whose face was twice its normal size, an arm twisted nearly out of joint, and someone who had difficulty speaking.

Even Museveni’s loyal press reported the release and videos appeared on the normally supportive Museveni television.

Needless to say, people were upset. But like always in Uganda, after a couple hundred protestors the issue settled into whether “Wine deserved it” for being too outspoken.

But then as the issue was evaporating, Museveni in typical egocentric autocratic fashion — in true Trumpian fashion — brought it up all over again:

Bob Wine was not tortured, Museveni declared in a statement. Those who say otherwise are “what President Trump calls ‘fake news’ generators.”

Yes, that’s right, he invoked Trump to support his position by defining it as Fake News.

It’s taken a while, but the people of the world are growing sensitive to what is truly fake news. Even more encouragingly people are beginning to understand how fake news propagators defend their prevarication by accusing their antagonists of creating fake news.

In other words, everybody – devils and angels included – agrees on what fake news is: a lie.

Determining who is lying and who is calling out the liar is where we’re at right now, and in the streets of Kampala at this moment it’s clear: the bigots, the autocrats, the dictators and the Trumps lie.