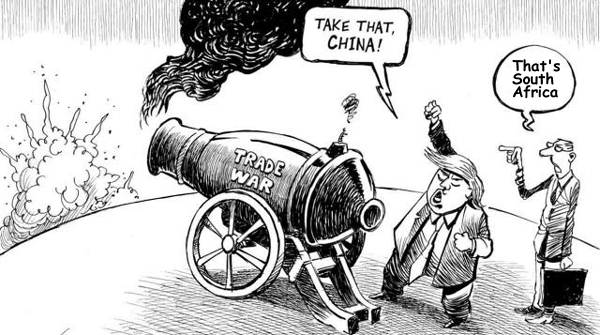 Africans from every part of the continent look to South African for global guidance. And South Africa is telling them to dump the United States. Trump has destroyed “any reservoir of trust in American words and promises.”

Look instead to: Germany, for international norms and decency; China, for economic directions and instructions; and … get this … Russia for global security. “… this, sadly, is the world that Donald Trump hath wrought,” South Africa’s Daily Maverick sums it up today.

Nigeria and South Africa are neck-and-neck for the largest economy in Africa, exchanging the 29th and 30th rank among world countries almost day-by-day. But South Africa retains a much stronger and more respected political position in the world than Nigeria.

In a half century, Nigeria and South Africa could be among the top ten GDP countries on earth. What South Africa believes and does is incontrovertibly of global consequence.

Americans think that an election can change everything. Trump supporters thought that by now they’d be rich. But you hear it all the time: some catastrophe over there? Correct it at the next election.

But global cooperation doesn’t work that way. Global cooperation is like business networking: it takes time and years to build with the horrible fatal flaw is that it can all be destroyed in a second.

The messages from South Africa to dump the U.S. have been slow and methodical. Politeness met Trump’s early-on ‘shit-hole’ remark. His inability to name African countries correctly was met with gauged amusement.

Slowly South African business began marketing outside the U.S. and increasingly the BRIC alliance grew more and more important until South Africa produced an elaborate summit in Johannesburg a few months ago.

In the U.N. and other agencies, South Africa started to side more and more with China. But none of this seemed too irreversible.

But South Africa is now headed into a recession caused by the United States, and what’s more serious, South Africans know the U.S. didn’t intend specifically target them.

Trump’s imposition of steel and aluminum tariffs was so poorly implemented that of all the countries in the world that suffered most quickly, it was probably South Africa.

“As such, SA does not pose a threat to US national security and to the US steel and aluminium industries, but is a source of strategic primary and secondary products used in further value-added manufacturing in the US, contributing to jobs in both countries.”

But the U.S. did not attach South Africa to its list of exceptions, and probably simply by oversight.

Three days ago Davies told Bloomberg, “We are collateral damage in a war you are fighting with someone else, in a war not of our making.”

Who cares about South Africa? That’s the effective reply that’s come from the U.S. Well, about 1.2 billion Africans care about South Africa and the country is fed up with the juvenile if wayward behaviors of our country.

No, we can’t wait two plus years for the next presidential election. Trumpism is out to destroy the world, not just America.