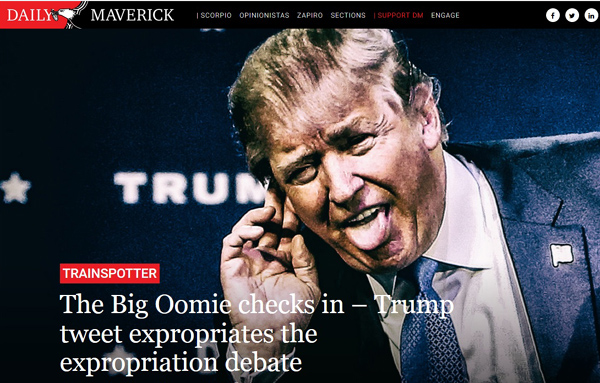 The picture above is from the lead article of the very popular Daily Maverick. South Africans of every political stripe remain furious with Tucker Carlson and Donald Trump’s patent lying about them yesterday.

Parts of this lead story now follow, written by one of South Africa’s most colorful authors and filmmakers, Richard Poplak.

(“Oomie” and “Suidlander” are explained in full after the article below.)

“What it is about early mornings that so inflames the passions of authoritarian fascists?

“Straight from the Washington DC swamp came [that] Tweeted missive, delivered by none other than the Shagger-In-Chief, Donald J. Trump:

I have asked Secretary of State @SecPompeo to closely study the South Africa land and farm seizures and expropriations and the large scale killing of farmers. “South African Government is now seizing land from white farmers.” @TuckerCarlson @FoxNews

“Strangely, some mistruths may have escaped the usually dependable scrim of fact checkers who ensure the quality of POTUS’s microblogged declarations. The South African government is, of course, not seizing land from white farmers, although now millions of tiki-torch wielding nutjobs think they are.

“And Secretary of State Mike Pompeo couldn’t undertake a close study of a Denny’s breakfast menu, given he’s not the close studying type.

“It’s difficult to know what it is about early mornings that so inflames the passions of authoritarian fascists. Trump’s daily Twitter stream famously starts in the very early hours, and one theory is that his early ablutions cause him significant discomfort. (Trump Tower cheeseburgers are not health food.)

“That said, there are reasons why he may have zeroed in on unhappy Mzansi and the threats faced by its local white folk. Tucker Carson, along with Breitbart News and other far-right neo-Nazi rags, have made it their business to make South Africa their business.

“Trump’s musings are the result of a sort of co-ordinated campaign, one that is so threadbare and daft that it could only find purchase in 21st century America.

“In 2017, the Suidlander local white-rights group undertook a tour of the United States. They preached the narrative of white genocide to responsive thought leaders like David Duke, former Ku Klux Klan Grand Wizard, and Richard Spencer, one of the alt-right’s luminaries.

“The tour caused a minor media storm that, clearly, has found some purchase in Washington DC. As Suidlander spokesperson Simon Roche told the Mail & Guardian, “there are some old oomies in the US who know who the Suidlanders are and what the Suidlanders represent.”

“One of them may be the Big Oomie himself.

“Trump, of course, is mired in another of his convenient controversies, the specifics of which can be whittled down to the following: the man is surrounded by inept Mafia goons, one of whom helped him disburse almost $300,000 in hush money to two pneumatic girls-about-town.

“This makes the Big Oomie the most profligate (and dumbest) john in human history. But his Republican enablers got their massive tax cut and their regulations reset. Meanwhile, he gets to Tweet to his base, using troubled little sideshows like South Africa as his medium.

“Another name in the racist pantheon; another Tweet aimed not at reality, but at the fantasies of the mythical Base. Just when you think you’re ditching the vestiges of colonialism, you realise you’re just another minion slaving away in Global Trumpland.”

***
Oomie is an Afrikaans appellation with a ton of meaning, from feeling slightly sick, to a difficult yet lovable uncle, to (as in this case) a blustering, uneducated old opinionated bully. Poplak’s use of it for Trump is his way of categorizing Trump’s fascism as almost unintentional – more stupid than visceral – which many progressive South Africans ascribe to old Afrikaans politicians who still revere the days of apartheid. Many world progressives like Poplak see Trump, Fox News and the entire Right in America more as dupes and puppets than ideologues or real leaders.

Straight from Wikipedia: “The Suidlanders (English: Southlanders) is a South African white supremacist survivalist group …[that] believes that a race war or general civil war is coming in South Africa as a result of a supposed white genocide.” Click here for their remarkable website.