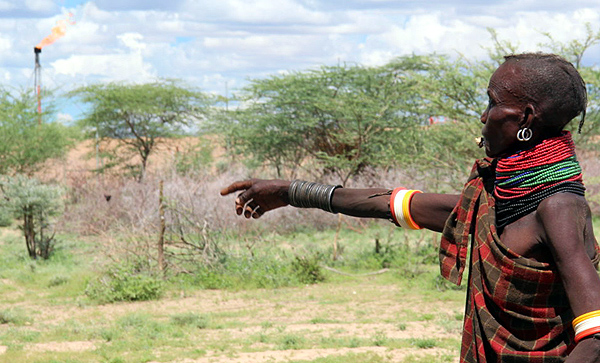 Our universe is composed of the natural world and our human imprint on it. Rarely the twain shall meet in a modern world. But from time to time they do: look at northern Kenya, today.

Conservationists who believe Kenya is moving too recklessly to develop oil in its northern deserts, and the neglected people who live there who stood to benefit, are today allied in opposing the development.

According to Treasury Secretary, Henry Rotich, Kenya hopes to produce 60-80,000 barrels of oil daily from the great Mojave deserts that surround the giant Lake Turkana in Kenya’s far north that borders Ethiopia.

This is one of Kenya’s most remote, poorest and least developed areas. A third of the county’s (state’s) children are underweight. A quarter are stunted. Free primary school attendance is the lowest in the country even though school meals are proffered in this region of perennial famine. 82% of adults have no education whatever.

And the area is among the most impacted by climate change with alternate periods of severe drought and flooding.

The need for quick solutions to this embattled area is paramount: So it seems right for the government to clear all obstacles to rapid development and so they acted. The Chinese were given all sorts of latitude to search for oil and in 2012 they found it. Quick contracts were made with multinationals and today oil is beginning to move to the port at Mombasa. Or that is, was.

Sometimes moving too fast sends the train off the rail.

Recently UNESCO declared this area a “World Heritage Site in Danger.” And last week local residents successfully staged a violent protest that halted all business for nearly a week.

These two quite different but critical responses to what most Kenyans celebrated with much promise suggests that unfettered development might be worse than no development at all.

UNESCO’s World Heritage Site program began in 1972 then grew substantially until the Great Recession and suffered considerably when the United States withdrew last year. But it remains an important funding program in Africa for many famous sites.

The program takes over various levels of management of important world natural and historical sites in return for substantial funding. Ngorongoro Crater is a World Heritage Site and would probably not have the funds to protect its famous free-ranging black rhino without this arrangement.

Turkana is a large World Heritage Site that includes sections of both northern Kenya and southern Ethiopia. Until oil was discovered here by the Chinese its natural and paleontological value was all it had.

UNESCO considers the rate of development for oil in the region – which also includes Chinese funded pipelines, dams and river reroutings in both Ethiopia and Kenya – to seriously threaten sources of fresh water, wetlands for many animals especially rare migratory birds, and some of the world’s most important early man sites.

You would think that a local Turkana pastoralist would discount such concerns if she sees a better life than the troubled one of her people’s recent past.

“The public and the County feel ignored on issues raised over oil exploration and there is the feeling that we have no say of the process,” the Governor of the county warned last October. Since then he has suggested the county might nationalize the oil fields, essentially placing them first under county control and then setting up a huge constitutional battle with the federal government.

Since October Turkana protests have grown. The issues have grown, too, from local people being ignored to issues of security and even conservation.

UNESCO and global conservationists would like Kenya and Ethiopia to more carefully manage their development. And:

“The Government’s dream of turning the country into the region’s leading oil producer has run into resistance from those they least expected” – the local people,“ according to Standard Media.