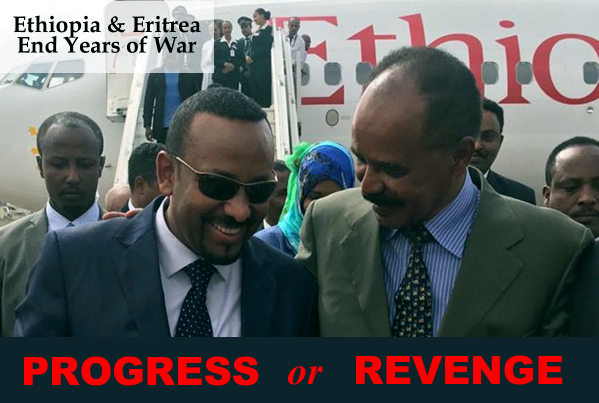 Yesterday’s much heralded peace accord between Ethiopia and Eritrea was seen as a glimmer of hope that people power and democratic ideas might be at last challenging some of Africa’s most autocratic regimes.

Not so fast, folks. Some of us don’t see it that way at all.

Much of Africa has been run mostly by heavy-handed dictators like Robert Mugabe of Zimbabwe and Paul Kagame of Rwanda. Even in presumed democracies like Uganda, the heavy-handed dictator presides following rigged elections. And even in more organic democracies like Kenya and South Africa, strongmen like Uhuru Kenyatta and Jacob Zuma have snuck into power in spite of popular opposition to them.

(I’ve written often how Trump is a mirror of Zuma: his rise, his scandals and ultimately I believe, his fall.)

Strongmen do well in Africa mostly because of the tribalism that divides their countries. Tribalism, ethnicity, race – is an unalterable division. Just as a black man can’t pretend to be white, a Kikuyu has a nearly equally difficult time pretending to be a Kalenjin. Ethnicity doesn’t lend itself to fake news.

Ethiopia adopted communism at the instant that its final emperor, Haile Selassie, was dethroned and killed in 1975 and has staunchly maintained it ever since. Rwanda has espoused democracy since its Independence from Belgium in 1962 and has remained a loyal and close ally of free-world states. Yet both countries have been actually ruled by strongmen or small groups of strongmen allied by ethnic roots from their moments of self-rule.

Although typing their political systems diametrically opposite, they are actually nearly identical.

Strongmen keep ethnic divides from destroying one another. Other than that, some of them are benevolent, some aren’t. Some grow their economies; others destroy them. Some are crooks, others angels.

Eritrea has over the millennia been a part of, then an enemy to Ethiopia. Sitting on Ethiopia’s northern border, its ethnicity was too small to ever wield power in a larger Ethiopia, but too homogeneous to give in. The trump card it holds over land-locked Ethiopia is that Eritrea borders the Red Sea.

In 1998 war broke out. Over the next several years 80,000 people were killed. War would erupt then subside for long periods of time, then reemerge ever since.

Ethiopia is a large country, Africa’s seventh largest economy and second most populous country, far eclipsing little Eritrea which is a very small country and at the very bottom of Africa’s economies and population. But Eritrea’s military support from a complex cabal of Arab and renegade nations like North Korea was strong enough to challenge Ethiopian dominion.

Interminable war between the two countries if not inevitable seemed politically expedient for them both. Why, then, did it end… and so suddenly?

Ethiopia has one of the fastest growing economies in Africa. Its increasingly educated population increasingly tech savvy, however, grew disenchanted with the lack of real change trickling down to the street. As everywhere in the world the rich were getting richer and the poor didn’t move or were getting poorer.

So the last several years have been turbulent for Ethiopia as a promise of a better life was held so close to people who were denied it. Street protests grew throughout the country and especially in the capital of Addis Ababa.

It’s been gruesome. Perhaps a 1000 protestors have been killed by police, but it would have been much, much more horrible and bloody if Addis were not the center of an ethnic group that was not in power. Let me explain.

As the Addis protests grew even police – which were mostly of the same ethnic group as the protesters – began to see a power shift and so likely relaxed their heavy responses. That allowed protests to swell enormously.

The prime minister and his government of Tigre ethnic persons resigned earlier this year. They were replaced by Oromo, including a young prime minister, Abiy Ahmed, who aligns himself with the Amharic peoples who compose most of Addis Ababa.

The Tigre border Eritrea. Although there’s no question that most Ethiopians welcome peace with Eritrea, Abiy is sticking it to the old Tigre guard that he replaced by making peace with their mortal enemy.

The BBC disagrees with me, calling Abiy “one of the most dynamic and charismatic politicians to emerge in modern Africa,” and praising the peace deal as “an example to the world of what is possible with bold leadership.”

Many analysts agree with the BBC. Abiy is young and charismatic. Times are changing and Abiy will be the first to shepherd radical changes.

I so wish, but I see it differently: As it has always been this remains an ethnic game of chess. Not until Ethiopians are able to see themselves differently than a part of their ethnic group will change occur.