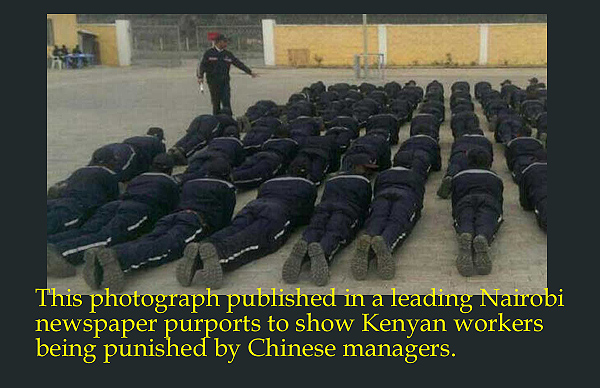 As the world fractures, the Chinese/African partnership of the last two decades is also coming apart, and the cleaver is racism. It’s a remarkable story and one that mirrors similar stories all around the world.

The best example is Kenya’s new railway, funded, built and now operated by the Chinese. As China contracts, as the world decays into smaller pieces, Chinese racism has become an explosive issue in Kenya.

Gigantic Chinese projects exists today in more than half of Africa’s countries. They are all infrastructure projects and all of them have been transparently quid pro quo.

The Ethiopian “Dam Project” will provide the power for the Sudanese/Ugandan/Ethiopian/Kenyan “Pipeline” to the Kenyan “Super Port.”

These – and many, many other similar projects attracted dozens of billions of dollars of Chinese investment, and they were all offered so that China could get oil. Other projects, for example the new Selous dam and nearby mines in Tanzania, are so that the Chinese can get uranium.

I and many others have admired the Chinese transparency. It was remarkably refreshing after centuries of Western dissimulation.

Western aid can be traced back to Livingstone’s successful populist campaign in Britain to fund Africa’s 3 C’s: civilization, commerce and Christianity, supposedly out of a large heart and empathetic soul.

Decades – even a century – of the slow release of Livingstone’s papers and letters by his family, though, reveals a Livingstone whose real motivation was quite different. There was no question of his religious faith, but the real reason he wanted Britain to fund his projects in Africa was to help him discover The Nile and become the world’s most renowned explorer.

Western governments continue this coopting aid to this very day. The Trump administration has come closest to admitting it.

From the days of the Cold War when aid was dumped with little accountability on any African country that would vote favorably with the western block in the U.N., to now when agricultural assistance to Kenya is restricted to using specified American agribusiness seeds and products, there’s clearly a quid pro quo.

That is the Chinese way, of course. The annoying part about this was that the western world denied it was their way, too.

The simple truth is that in modern times almost all foreign aid (with notable exceptions from the Scandinavian countries) has carried heavy quid pro quo. Aid is simply subsidies to certain companies whose products are needed in the developing world.

It’s the reason that “aid” has been such a poor tool for development.

Nevertheless, I and many other observers praised Chinese transparency regarding foreign aid and criticized this western hypocrisy for years.

But now the stress of deglobalizaton – which is an unnatural socio-economic phenomenon – is stripping even the quid pro quos off a core of racism.

The new Kenyan railway is up and running, and it’s impressive. “But beneath this shiny veneer is a tale of pain, anguish and broken dreams for a multitude of Kenyans” writes an investigative journalist with Kenya’s Daily Standard.

“Chinese nationals have created a small kingdom in which they run roughshod over Kenyan workers who … are experiencing neo-colonialism, racism and blatant discrimination as the taxpayer foots the” operating costs of this single train which could amount to more than 15% of the national budget.

Not to mention the debt held by the Chinese, which amounts to more than a fifth of an annual budget.

(Recently, Sri Lanka defaulted on its debt to the Chinese for building its railway. After putting on a public facade of not wanting infrastructure just cash, China cleverly organized some its debt payment by taking full ownership of Sri Lanka’s only port.)

The Standard article and numerous others, including widespread social media condemnation of Chinese managers throughout the country, reflects a growing xenophobia in Kenya that could very likely turn against all non-colored persons, then perhaps even non-Kenyans exploding even more the continued tribalism in this deeply ethnically divided country.

Everything has a core. Trump’s dystopian policies and the support he still maintains, the self-destruction of Brexit that continues, the revealing immigration stresses of the last decade – we’re learning all have a common core, and as the Kenyan model and the developing Chinese/Africa rift shows, it’s racism.