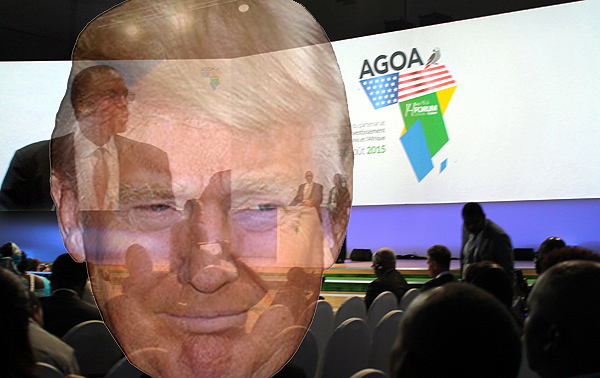 Until Trump Africans relied heavily on an unilateral trade policy first passed by Congress in 2000 called AGOA. This week’s annual AGOA convention in Washington did not go well, but … they seemed to have a good time. What?

Trade with Africa viewed from America is terribly small. Trade with the U.S. viewed from Africa is the single greatest component of their policies and hopes. AGOA threw them a bone. It allowed the U.S. – with the pen stroke of a president – to create a virtual free trade zone with whatever African countries he wants.

American politicians didn’t mind this concentration of trade policy with the executive, because the amount of trade was is small. Even large trading partners like China and the EU understood the policy as a good development policy to assist the poorest of the world.

So it has worked really well until last year. Perhaps the most to benefit has been South Africa that used AGOA in large part to build its car parts and aerospace industries by manufacturing parts that are exported to the U.S.

With Trump this is set to end. The South Africans currency has begun to tank. It all depends upon whether Trump will put South Africa on the “Section 232″ exemption list, and so far, there’s no indication he will. His 15-25% tariff on steel and 10% aluminum could cripple South Africa.

The country has large deposits of coal and aluminum. Since 2000 its steel and aluminum industries have grown substantially. Now, it’s at risk.

Africans came to Washington hoping for some encouragement. What they received instead were conflicting statements by our highest officials.

The conflicting messages by John Sullivan, Deputy Secretary of State, and Robert Lighthizer, trade representative for Africa, confirm African concerns that world trade is falling apart and that they were be collateral damage and among the first to be hurt.

Sullivan opened the conference. It was standard pablum with a new twist of the importance that “trading partners” show evidence of aggressive security. To be expected from a conservative regime and actually in terms of what the Africans expected, hopeful.

A day later, the man more truly involved with the day-to-day negotiations with Africa, Lighthizer struck a completely different tone.

His speech was laced with caution. Then just before he finished he was forced to add, “To be clear, the United States is not abandoning AGOA for either the short term or the long term. But there are compelling reasons to pursue a comprehensive and more permanent trade and investment framework to govern trade between the United States and Africa.”

In diplospeak, of course, he means exactly the opposite.

On the one hand it was more fair that he warned the Africans than Sullivan’s standard fare that suggested the status quo prevailed. Lighthizer knows.

On July 9 – weeks later than previous administrations and just in the nick of time for the AGOA meeting – the U.S. published its Congressionally mandated announcement that it was reviewing the list of AGOA countries.

As with all such government announcements inviting public input this one limited that time to three weeks, a ridiculously short period. At the end of this period the U.S. will determine which countries go on the AGOA list and which don’t.

Africans weren’t so put off by this insulting action, because they understand that regardless of which countries get on the list, it will be up to Trump whether they are exempted from the more important tariffs.

There were banquets and cocktail parties, press conferences and interviews, tours and side meetings, but in the end the Africans know it was just a lark they were enjoying. Like among many of their own countries, all this hoopla matters little.

What matters is the dictator.